SIGN IN
Dark Mode
NewsWorldWas there massive cancellation of flights in China and empty airspace over Beijing?

Was there a massive cancellation of flights in China and empty airspace over Beijing?

There were unconfirmed reports of massive flight cancellations and empty airspace over Beijing, fueling coup rumours.

By Saikiran Kannan: Yesterday, the social media and sections of the news media went berserk when certain popular Twitter accounts that are popular for their updates on China among general users posted some unconfirmed images showing an empty air space over China. These accounts also reported that most of the trains in China were also cancelled without reason. This spread like wildfire and amounted to strong rumours about the possibility of a military coup in China to oust Chinese President Xi Jinping.

There was also the circulation of an unconfirmed video which showed certain military vehicles allegedly heading to Beijing in the aftermath of the coup rumours. Upon extensive investigation, we decided to calm the decibels down and tell the story, as it is.

What do the flight trackers say?

There were many social media accounts and commentators who shared random flight tracker snapshots to show the absence of air activity over China. While it is always good to use open-source data for analysis, it is important to add a bit of context and a good amount of common sense to the same.

Popular accounts on Twitter posted about the cancellation of flights on September 21and that it was due to some military requests. On playing back the entire movement of flights over the Chinese airspace, we did not notice any unnatural drop in the number of flights at any given time, and even the Beijing airspace (where the bulk of the actions were to take place) was perfectly normal. 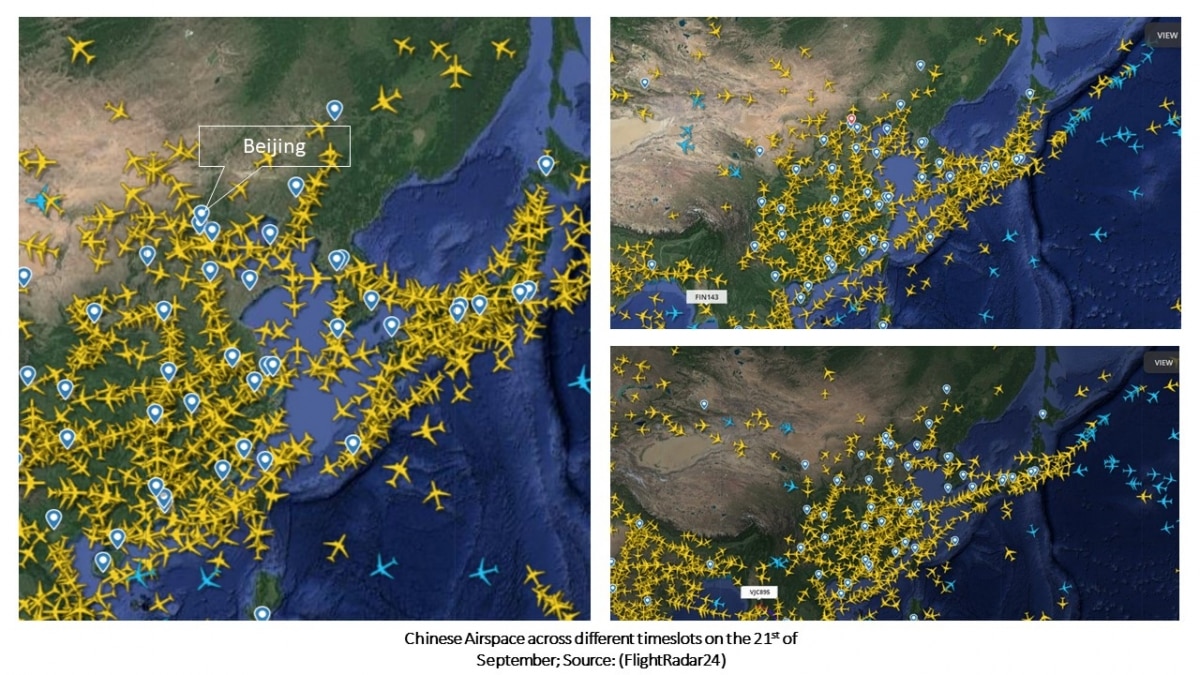 What we also did was to go through the activity not just on September 21, but for all the days thereafter to see if there was anything unusual about the number of flights over China (or the lack of it) and we could not come up with even the slightest of outliers in the patterns.

The snapshots below have been categorized into different timeslots across the 22, 23, 24, and 25 of September. It shows that for each time slot, the air traffic is very similar on all the observed days this week. 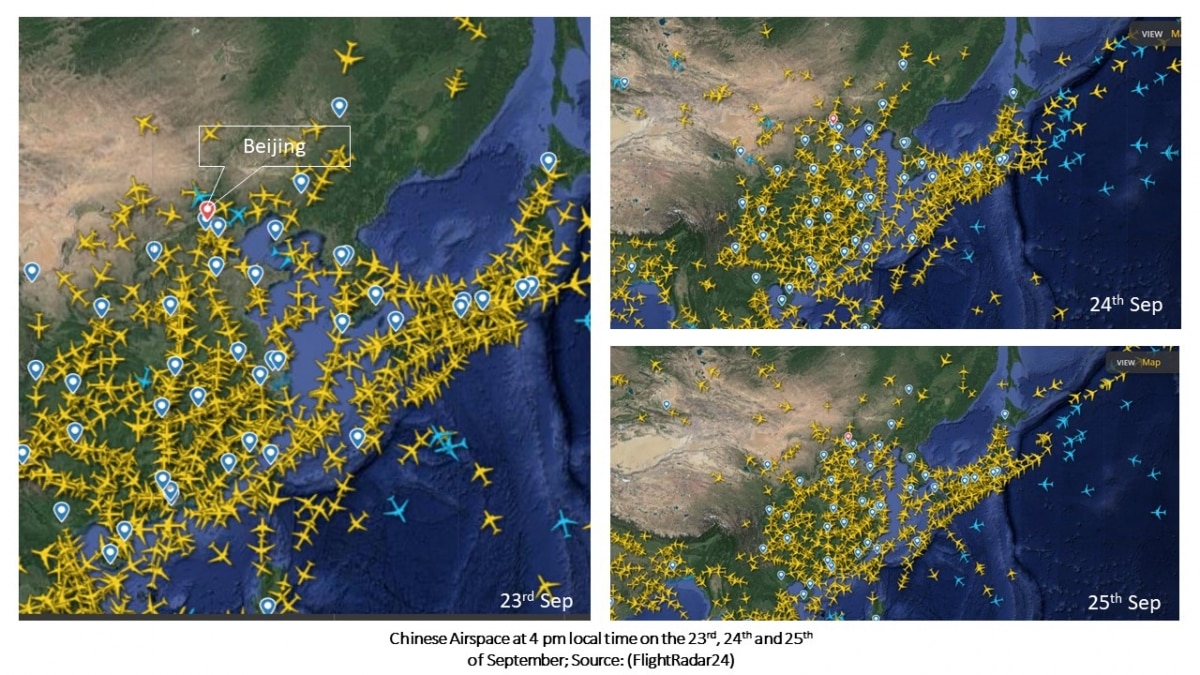 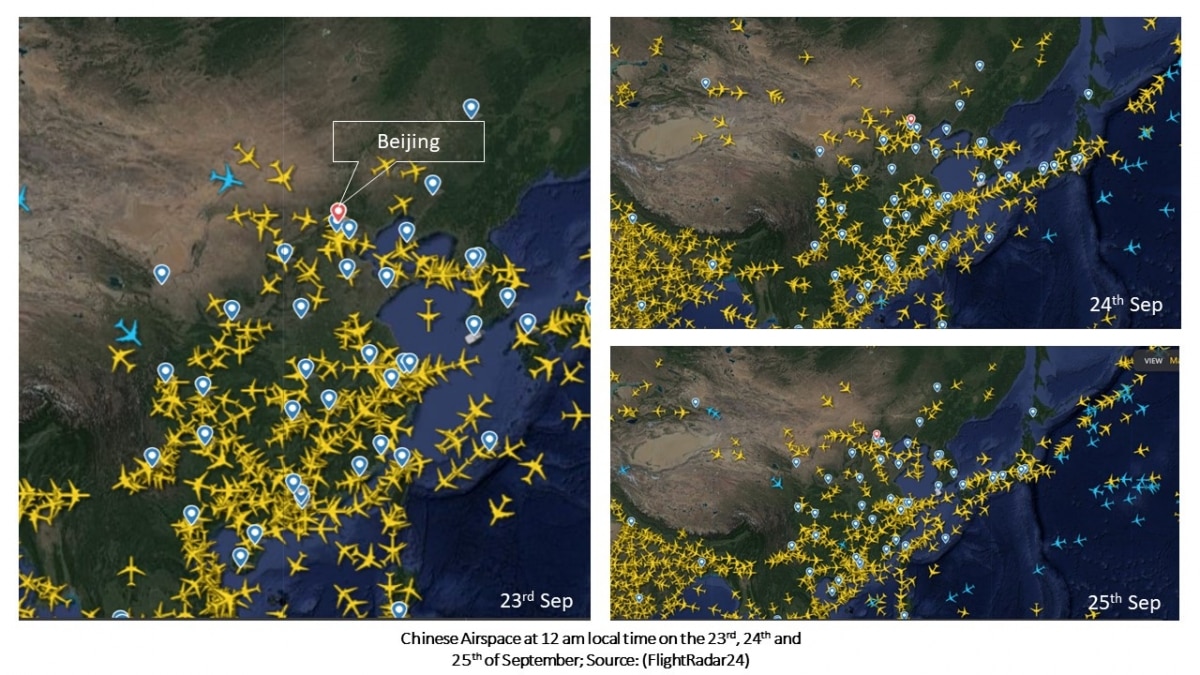 We also dug into the database of Chinese flights (actual flights that took off and landed) which tracks the number of actual flights on a daily basis and for the data from 2019 to 2022, which shows that the flight numbers have seen a cyclical dip each time there has been a large cluster or spread of COVID and hence the cancellation of flights do not mean for certain that it is due to some untoward incident or the work of the Chinese military forces.

The civil aviation operation briefing of China for the month of September says that the number of flights in 2022 from January until September has seen a decrease of 46.4% when compared to the year 2021. The graph shows 2019 data in blue, 2021 data in grey, and 2022 data in red. 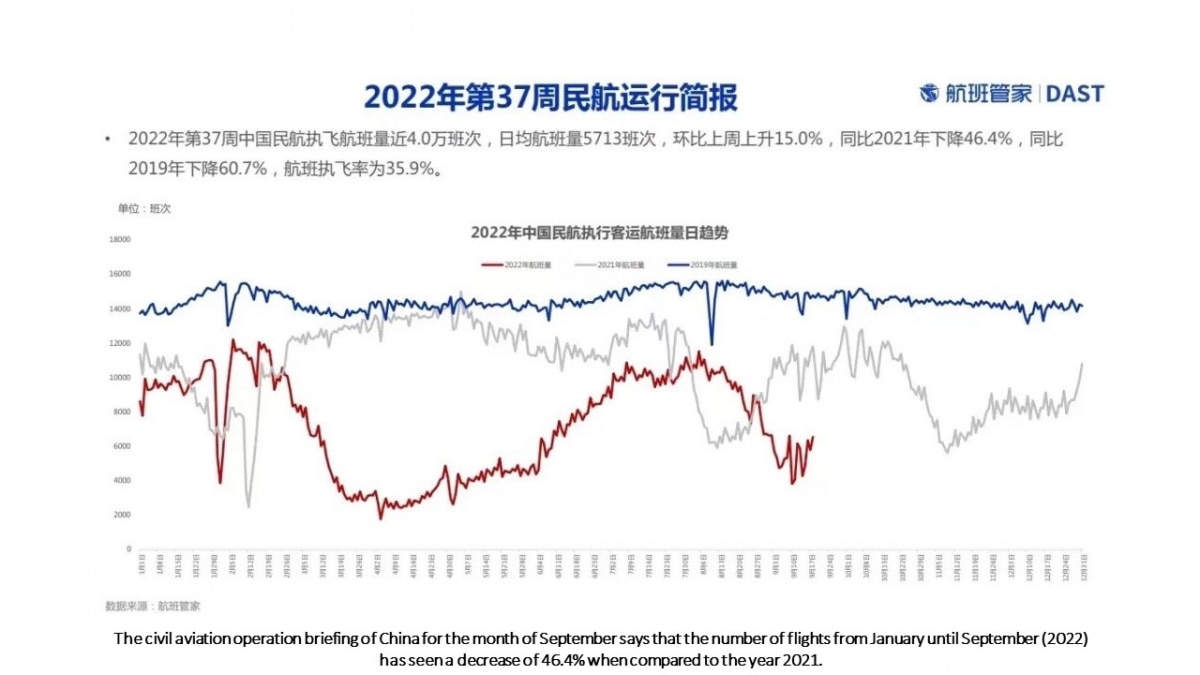 The fallacy of these rumours:

There are several reasons why this mass hysteria or excitement took over social media and the news media this weekend concerning Xi Jinping’s future. Let us look at them one by one.

1) Looking at the flight tracker data with context: Many accounts looked at the flight tracking data with the wrong context and at the wrong times. Firstly, China is not as symmetric as say, India in terms of its population ratio and demographics. China is densely populated on its Eastern and Southern sides and not so much on its central and Western sides. Hence, many of the images shared of its airspace were projected as though there were no flights over most of China. The other aspect is that many snapshots of the air space posted online were taken during the wee hours of the Chinese local time zone. Hence, there were limited takeoffs and landings at that time. This is down to people from across the globe snapshotting the airspace at different times and not necessarily looking at the peak flight hours of China.

2) China is probably the only country in the world to still have some of the toughest COVID restrictions in place. We still see towns and cities shut down and brought to a standstill when new clusters emerge. They still follow a zero-Covid policy and hence foreigners are still not wholly welcome in China. Hence, we continue to see mass flight cancellations in China owing to various internal realignments and procedures. The reported flight cancellations could well have been due to COVID precautions in place, especially with China celebrating its national day on the 1st of October to mark the formation of the People's Republic of China. This could also be a reason why some movements of military vehicles were happening toward Beijing for the parade.

3) China’s social media will usually be abuzz with rumours and information on things like these if they were indeed happening. Remember the Galwan truths? It was Weibo that showed the world what the Chinese citizens were thinking about their government hiding the truth about the dead PLA soldiers and their hidden graves. This time around, there was no real chatter on any of these news items, be it the military coup, the cancelled flights, or Xi Jinping’s alleged house arrest. With almost zero chatter, it is important to consider this as a tiny piece of truth.

4) China still has several foreign journalists living within and none of them really raised an alarm about the alleged rumours being in circulation. One German journalist, Georg Fahrion, ventured into the city of Beijing today to give a sense of what the real situation was.

Today in Beijing, I investigated the #chinacoup so you don’t have to. At considerable personal risk, I ventured out to some neuralgic key points in the city. Disturbing finds. Brace yourselves. /1 pic.twitter.com/z4CJYpQbbk — Georg Fahrion (@schorselysees) September 25, 2022

5) He even visited the Xinhua Gate, which is the main entrance to the Zhongnanhai compound, where the entire central leadership resides and works, including Xi Jinping. There was hardly any military presence there aside from the regular group of security men. Tiananmen square, which is notoriously known for military actions and coups, was also devoid of any real action apart from a few tourists posing for photographs.

Nearby Tian’anmen Square swarms with thugs in plainclothes. I’ve been in China long enough to know these are not tourists. /3 pic.twitter.com/xTwglk4v8i — Georg Fahrion (@schorselysees) September 25, 2022

6) Given the popularity of China as a topic and the fact that it is something that really gets a lot of traction on social media, it is easy to spread a rumour and see your posts reach millions of users. Xi Jinping was present at the SCO summit and had only returned to China a few days ago and it is quite possible that he is resting or under quarantine, but social media was abuzz that he was arrested and kept under house arrest. It is also not the first time he has gone underground as, during the end of 2021, there was a similar span when he was not seen around for quite a few days which again started similar rumours back then. It is not irrefutable that he might be facing some stiff resistance to his re-election as the President. But his return on October 16 should surely put all the other rumours to rest.

Why Pakistan has banned its official Oscar-entry ‘Joyland’

US midterms: Blow to Biden as Republicans wrest control of House with slim majority