Hurricane Ian, one of the most powerful storms recorded in the US, made landfall on the Florida coast on Wednesday. Visuals from the hurricane show reporters getting swept away and sharks swimming in the streets. 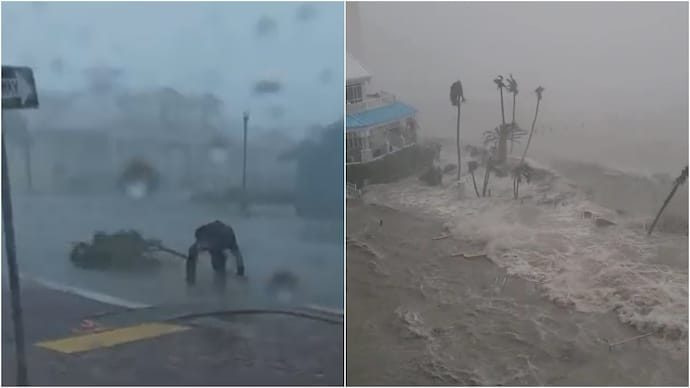 A weatherman struggled to stand up as strong winds of the hurricane swept him away. (Screengrab from video)

By Chingkheinganbi Mayengbam: Hurricane Ian lashed the US’s Florida coast on Wednesday, unleashing torrential rains and howling winds. Visuals from the hurricane, which is now one of the most powerful storms ever recorded in the US, showed reporters getting blown away by the gusty wind and sharks occupying the city streets after they were washed ashore.

Here are some of the visuals captured by locals in the area:

A category 4 storm slammed the Florida coast with winds going at the speed of 241 kilometres per hour (kmph). More than 1.8 million people in Florida were without electricity, according to PowerOutage.us. Nearly every home and business in three counties was without power, AP reported.

We were in the eye wall of Cat. 4 #Hurricane #Ian for over 5 hours and the back side was the worst.
I haven't experienced anything close to this in over 30 years @weatherchannel pic.twitter.com/wfEqcuEBAm — Mike Seidel (@mikeseidel) September 29, 2022

Electric transformers were blown up by the storm and sparks lighted up the Florida sky in a video.

Before making landfall in Florida, the storm previously tore into Cuba, killing two people. It also brought down the country’s electrical grid, leaving behind 11 million people with no electricity. US border authorities reported that 20 Cuban migrants were missing after their boat sank off the Florida coast as the hurricane approached the coast. As the storm triggered massive floods everywhere in Florida, the federal government sent 300 ambulances with medical teams and was ready to provide 3.7 million meals and 3.5 million liters of water once the storm passes.

US President Joe Biden assured people that the government will "be there to help you clean up and rebuild, to help Florida get moving again." He added, “We’ll be there every step of the way. That’s my absolute commitment to the people of the state of Florida.”

(With input from Reuters and AP)