A Hindu temple was vandalised by unidentified people in the UK’s Leicester. The High Commission of India in the UK has condemned the attacks on Hindu religious symbols. 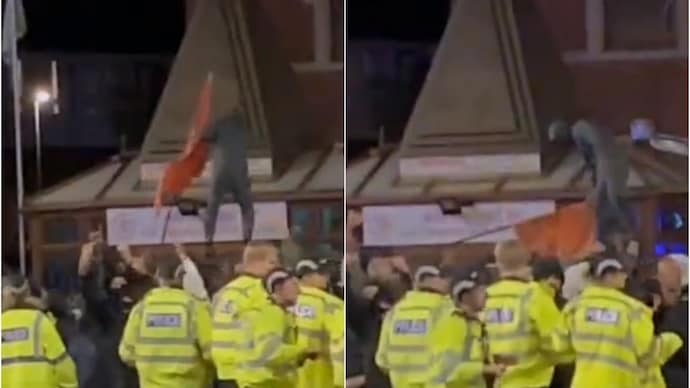 A video of the incident shows a man pulling down a saffron flag in Leicester. (Screengrab)

“We strongly condemn the violence perpetrated against the Indian community in Leicester and the vandalisation of premises and symbols of Hindu religion. We have strongly taken up this matter with the UK authorities and have sought immediate action against those involved in these attacks. We call on the authorities to provide protection to the affected people,” the Indian High commission said in a statement on Monday.

WHAT HAPPENED IN LEICESTER?

A Hindu temple was vandalised and a saffron flag outside it was pulled down by unidentified people in East Leicester in the United Kingdom.

A video of the incident shows a man clothed in black getting atop a building and pulling down a saffron flag while onlookers cheer him on. The vandalism incident follows amid communal tensions between Hindu and Muslim groups following an India-Pakistan Asia Cup cricket match last month.

Any other group acting like this, would see cops in riot gear out - why are @leicspolice taking such a soft line with these thugs?#Leicester

The Leicestershire Police has initiated an investigation after a video of the incident surfaced online. So far, 15 people have been arrested in connection with the case.