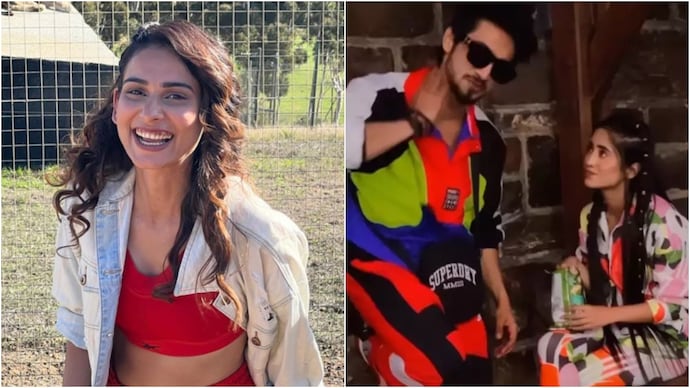 While Aneri Vajani got evicted, Mr. Faisu and Shivangi Joshi won the final task on KKK 12.

By Grace Cyril: Rohit Shetty-hosted reality show, Khatron Ke Khiladi 12, started airing on Colors TV from July 2. The adventure-based reality show has emerged as one of the most watched shows on Indian Television. Fans are rooting for their favourite celebrity to perform the stunts well and win this season. The reality show has managed to pique everyone's interest with new twists and turns every episode. The 12th season stars many well-known celebs, including Sriti Jha, Nishant Bhat, Mohit Malik, Rubina Dilaik, and Shivangi Joshi, amongst others. The reality show was shot in Cape Town, South Africa. In Episode 6 of Khatron Ke Khiladi 12, which aired on July 17, Aneri Vajani got evicted after she failed to perform a task well. Meanwhile, Shivangi Joshi and Faisal Shaikh won the final task.

Here is all that happened on KKK 12's sixth episode on July 17:

1. The first task of Khatron Ke Khiladi 12 episode six included a lot of dogs and some running. This particular task was meant for Aneri Vajani, Kanika Mann and Sriti Jha, out of which, Kanika emerged as the winner.

2. Aneri and Sriti got the fear fanda. Along with them, Rajiv Adatia, Chetna Pande, Pratik Sehajpal, and Shivangi Joshi also got a chance to get rid of the fear fanda in the next task.

3. In this fear fanda task, Aneri-Shivangi, Rajiv-Chetna, and Pratik-Sriti partnered up. Rohit Shetty then introduced a set of earthworms, cockroaches, and snails and explained that the stunt will be performed in pairs.

4. In the stunt, the partners had to keep those insects in their mouth and run to a different side. They had to memorise eight digits on a screen and type them, and unlock the iPad and return.

5. After everyone with the fear fanda completed this task, Rohit Shetty announced the winner. Aneri and Shivangi lost by a mere four seconds.

6. The actresses had to perform the elimination stunt along with Faisal Shaikh.

7. Meanwhile, the elimination stunt also included creepy crawlies, and they had to perform it in eight minutes. In the task, the contestants were locked in a bed with subsections, each with a different animal.

8. Aneri Vajani eventually failed to complete the task. Hence, she was eliminated this weekend. Shivangi and Faisal won this weekend's final task, and were safe.

Did you watch the sixth episode of Khatron Ke Khiladi 12? What do you have to say?

'What we say, we deliver': Arvind Kejriwal's 10 guarantees ahead of Delhi civic body polls

'What we say, we deliver': Arvind Kejriwal announces 10 guarantees