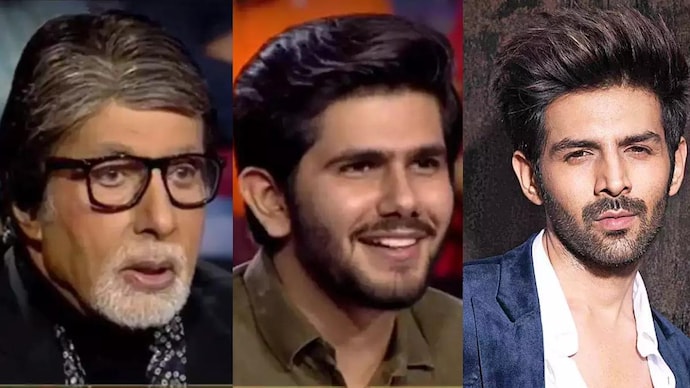 By Grace Cyril: In the November 21 episode of Kaun Banega Crorepati 14, host Amitabh Bachchan commenced by introducing the fresh contestants for this week. He played the Fastest Finger First round which was won by Prakash Jaisingh. However, he could only win till Rs 3,20,000 on the quiz show. Next up, Vaibhav Rekhi won the second segment of the Fastest Finger First round and made it to the hotseat opposite Big B. He had loads of fun chat with the Bollywood superstar, who compared Vaibhav's looks to that of Kartik Aaryan. Big B also had a sweet surprise for the contestant.

During the episode, Amitabh Bachchan told Vaibhav Rekhi that he looks like bollywood actor Kartik Aaryan. Later, Big B asked him about his love life. To this, Vaibhav shared an interesting anecdote on how Kartik Aaryan unknowingly helped him find a girlfriend. Vaibhav revealed that he managed to meet the love of his life with Kartik Aaryan’s help. Kartik had reposted one of Vaibhav’s picture, and a girl texted him after that. Soon, they started chatting and dating.

When Big B asked Vaibhav how his relationship is going, the contestant said, "She is the female version of me. Ek dam Geet from Jab We Met jaisi lagti hai. But humari arguments bhi hoti rehti hai, aapko toh pata hi hoga kaise arguments hote hai.” Big B laughed saying, “You conviniently diverted the conversation to me.”

Big B then surprised Vaibhav Rekhi by video calling Kartik Aaryan. He requested the actor to say ‘hi’ to his girlfriend. Kartik happily obliged.

KBC 14 premiered on August 7. The first episode witnessed Big B welcoming eminent celebrities, who took over the hotseat and played the game. Those who graced the show as special guests included Aamir Khan, sports icons like Mary Kom and Sunil Chhetri, along with India's first Blade Runner, Major DP Singh, and Mithali Madhumita, the first female officer to win the Gallantry Award.

--- ENDS ---
ALSO READ I | KBC 14 Episode 75 Written Update: Big B says he survived on 'puchkas' when he had no money
Edited By:
Grace Cyril
Published On:
Nov 22, 2022
Listen to this story
Watch Live TV
Advertisement