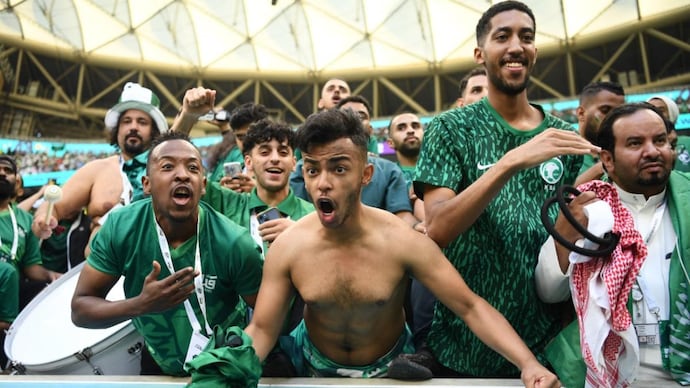 Saudi Arabia stunned Argentina in the World Cup on Tuesday with a 2-1 victory over Lionel Messi's side, sparking an outpouring of Arab pride amidst the Middle East's first staging of soccer's top tournament.

Ronaldo's iconic 'Siuu' celebration is by far the most legendary and popular sporting celebration, and it has been performed by many athletes in honour of the Portuguese marksman. Ronald jumps high and does a mid-air piroutte while shouting "si!" (Sometimes spelled'siu') - 'Yes' in Spanish. He once screamed "siiii!" after winning the Ballon d'Or ahead of Lio Messi at the 2014 ceremony.

"Thank God, the players were up to it and we wiped them. They were relying on one player, we competed as a team and we wiped them, we are up to it. Watch out for Saudi Arabia because when it hits, it hurts," Saudi fan Abdelaziz al-Khwatem was quoted as saying by Reuters.

A long line of cars with veiled women standing in their open sunroofs waving the Saudi flag was shown on Saudi television. Other vehicles carried children making the victory sign.

"We were expecting Saudi would be easy and to score five goals against them. But the strategy of the Saudis at the end was not to let us have the ball at all. They made the goals and that was it," 21-year-old Argentinian fan Juliana Vega was quoted as saying by Reuters.

Messi scored a penalty in the 10th minute as part of a dominant first-half performance in which he and Lautaro Martinez had three goals disallowed for offside. However, Saleh Al-Shehri fired in a low shot, and in the 53rd minute, Salem Al-Dawsari curled in a scorching strike from the edge of the penalty area, leaving Argentina and Messi stunned.