SIGN IN
Dark Mode
NewsSportsFootballAlphonso Davies has a big smile on his face: Herdman ahead of Belgium clash

FIFA WC: Alphonso Davies has a big smile on his face, says Canada coach John Herdman ahead of game vs Belgium

Canada coach John Herdman has said Bayern Munich star Alphonso Davies has a big smile on his face ahead of their game against Belgium at the FIFA World Cup. 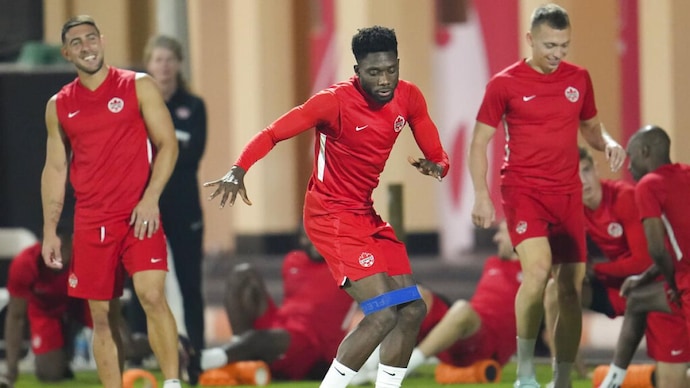 By India Today Web Desk: Canada coach John Herdman has said Bayern Munich star Alphonso Davies has a big smile on his face ahead of their game against Belgium at the FIFA World Cup.

Speaking ahead of their game, Herdman said Davies is ready to face Belgium and has a big smile on his face.

“Yeah, I mean, he's a player. This is his moment, his World Cup. I mean, that's what we've all been willing for him to be ready to go. He's clear that he wanted to play. And I think our medical team, you know, we wanted him to play as well. He's been in full training and he's got that big smile on his face, which is great,” said Herdman.

The Canada head coach said the team will be treating their match against Belgium as a cup final, insisting Belgium will be a really good test for the team.

“Enjoyment comes through competing. And I think the competition element against Belgium will be a real good test for the staff and for the players. I think that's the opportunity we have here. I think coming into a game like this, we don't have a great amount to lose, just a genuine opportunity to make it our our cup final. And that's that's what it is for Canada,” Herdman added.

Speaking about Canada’s expectations from the FIFA World Cup, Herdman said Canada will be looking to compete to win every single match.