SIGN IN
Dark Mode
NewsSCIENCEWhat happens under a volcano before it explodes? Scientists look inside

What happens under a volcano before it explodes? Scientists look inside

Scientists have looked inside a volcano to trace the origin and journey of magma and how complex plumbing transports it to the surface. 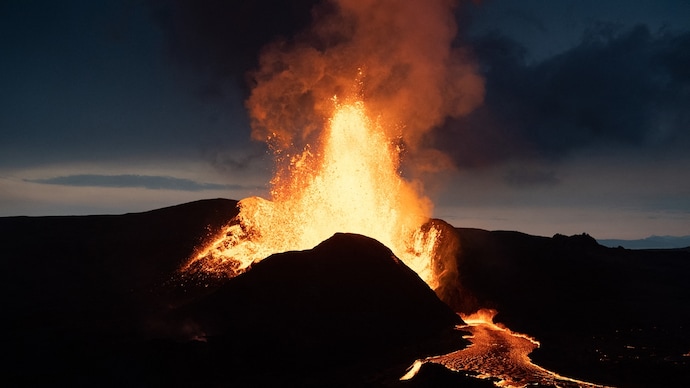 Lava erupts from the Fagradalsfjall volcano on the Reykjanes Peninsula in southwestern Iceland. (Photo: AFP)

By India Today Web Desk: Ever wondered what really propels the magma to be thrown so violently from a volcano into the air and then all across the surface? Scientists have now looked inside the volcano to trace the origin and the journey of the magma and revealed unique details about the churning happening under the surface of the planet.

Scientists at the University of Cambridge have studied the chemistry of lavas and volcanic gases almost as they erupted, creating a real-time picture of the churnings under the surface before the volcano erupts. They found that these eruptions are fed by complex plumbing systems.

The findings have been published in the journal Nature, which is based on the analysis of volcanic activity on Iceland’s Reykjanes peninsula that exploded in 2021. The study presents unique insights into processes occurring in the volcano based on geochemical studies and analysis of basalts that erupted during the first 50days of the eruption. Lava flows from a fissure along the Fagradalsfjall on the Reykjanes Peninsula in Iceland. (Photo: AFP)

The Fagradalsfjall eruption on the Reykjanes Peninsula in Iceland in 2021 was unusual as it came after centuries of lull and the magma was supplied from a deep reservoir originating around 15 kilometres beneath the surface, at the base of Earth’s crust. The team analysed not just the magma from the eruption but also details of gas emissions.

They found that during the initial days of the explosion, the magma was travelling around the boundary between the crust and underlying mantle the thick, rocky layer that makes up most of Earth’s interior. However, as the days progressed, the source changed to greater depths.

“Ever since Enlightenment thinkers started writing about volcanoes, scientists have drawn cross-sections to visualise how they might work below ground. This study draws together different strands of information from monitoring the chemistry of lava and gas emissions to describe what is happening up to 20 kilometres down,” co-author of the study, Professor Clive Oppenheimer, from Cambridge’s Department of Geography said.

They analysed magnesium content in the magma and carbon dioxide levels in the volcanic gases to establish that the eruption was fed by something like a high-speed train direct to the mantle.

“We’ve known for a while that magma coming from the mantle is variable. But we’ve had to work hard to find clues as to how this complex mixing happens,” Professor John Maclennan from Cambridge’s Department of Earth Sciences said. The research confirms that new magma can flow into a deep reservoir and mix with existing magma rapidly, in as little as 20 days.