SIGN IN
Dark Mode
NewsSCIENCEEarth-like clouds seen on Mars. They are churned by dust devils

Earth-like clouds seen on Mars. They are churned by dust devils

The new revelations indicate that the formation of clouds on Earth and Mars could have a similar origin story. 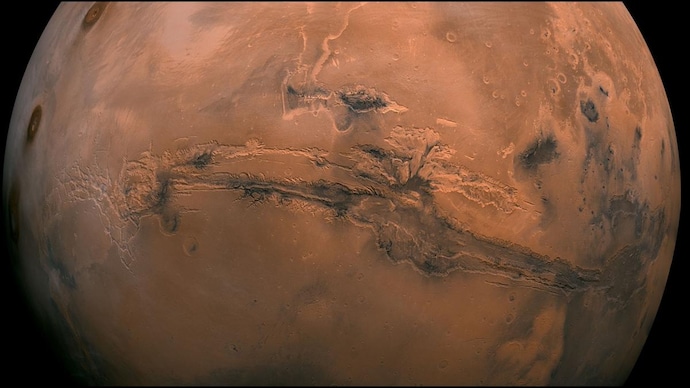 The study dives into two dust storms that occurred near the Martian North Pole in 2019. (Photo: Nasa)

By India Today Web Desk: Earth and Mars are completely different, while the Red Planet once had flowing rivers and lakes on the surface, it is now a barren world hanging in the darkness of space. The European Space Agency, however, differs. Europe's Mars Express has revealed that the planet churns up surprisingly Earth-like cloud patterns that are like those seen on Earth's tropical regions.

The study dives into two dust storms that occurred near the Martian North Pole in 2019. The storms were monitored during springtime at the North Pole, a time when local storms commonly brew around the receding ice cap. The Visual Monitoring Camera (VMC) and the High-Resolution Stereo Camera (HRSC) on Mars Express came together with the camera on board NASA’s Mars Reconnaissance Orbiter to see the phenomenon.

Also Read | No one killed Bruce Lee: New theory suggests he drank too much water

The images reveal that storms appear to grow and disappear in repeated cycles over a period of days, exhibiting common features and shapes. These spiral shapes are visible in wide views f the HRSC images and are between 1000 and 2000 km in length, and their origin is the same as that of the extratropical cyclones observed in Earth's mid-latitudes and polar latitudes.

The images revealed that dust storms are made up of regularly spaced smaller cloud cells, arranged like grains or pebbles. The texture is likely caused by convection, whereby hot air rises because it is less dense than the cooler air around it. This form of convection is known as closed-cell convection when air rises in the center of small cloud pockets.

“When thinking of a Mars-like atmosphere on Earth, one might easily think of a dry desert or polar region. It is quite unexpected then, that through tracking the chaotic movement of dust storms, that parallels can be drawn with the processes that occur in Earth’s moist, hot, and decidedly very un-Mars-like tropical regions,” Colin Wilson, ESA’s Mars Express project scientist, said in a statement.

The change in pattern revealed that the wind was blowing at speeds of up to 140 km/h, causing the shape of the cells to elongate in the direction of the wind. The team was also able to measure the altitude of dust clouds by combining the length of the shadows they cast with knowledge of the Sun’s position. The results revealed that the dust can reach approximately 6–11 km above the ground and the cells have typical horizontal sizes of 20–40 km.