Ashok Gehlot has gone from being a loyalist to defying the same high command that wanted him to lead the Congress. Here is why the Rajasthan crisis should not come as a surprise. 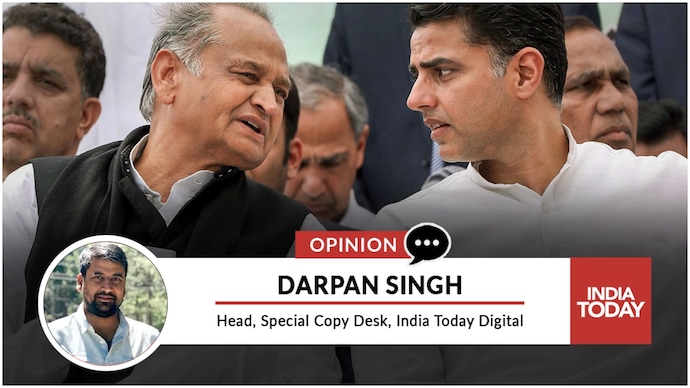 By Darpan Singh: In 2018, the Congress won the Rajasthan Assembly election. Young blood Sachin Pilot was seen as the architect of a rare Congress victory. But the party high command gave the chief minister’s chair to old guard representative and more experienced Ashok Gehlot, who was hardly active after the loss in the previous election. It was a mistake, given how desperately the party needed to connect with the youth in order to have a credible shot at revival.

It was a repeat of what the Congress high command, the Gandhis, had done in Assam, preferring Tarun Gogoi to Himanta Biswa Sharma, a fatal move that soon saw the whole of India’s northeast changing political allegiance to the BJP. In Rajasthan, the Congress sought to compensate Pilot by making him the deputy chief minister.

It was the second mistake. But then, allowing unhealthy competition to fester has been one of the ways for organisations from corporates to political parties to ensure nobody becomes all-powerful.

In 2018, the Congress’ assumption perhaps was that Pilot would understand. It’s an assumption that leaders make while ignoring merit and ambitions and overlooking possibilities of disastrous consequences. This is the assumption that Omi Shukla in Vishal Bhardwaj’s 'Omkara' makes by annointing Keshu Firangi the new Bahubali while not rewarding Langda Tyagi for all that he had done for the band. The assumption, cut off from ground realities, was Langda samajh jayega (he will understand).

Langda Tyagi does not take the humiliation lying down. He resorts to a series of covert actions leading to a full-blown tragedy. Pilot also refused to "understand" and mounted an open rebellion in 2020, breathing down Gehlot's neck. The CM called him nikamma and nakara whose “English-speaking abilities do not count for much.”

The Congress high command forced a ceasefire between Gehlot and Pilot. It was the third mistake. If most MLAs were with Gehlot, the Gandhis should have taken Pilot out of Rajasthan and brought him to Delhi. Nobody was in doubt that the two Rajasthan leaders were not going to get along. It was an uneasy truce.

Cut to 2022. Rahul Gandhi began his five-month Bharat Jodo Yatra even when the party was rolling out processes to elect its new president. It was the fourth mistake. It sent the wrong signal.

Bharat Jodo Yatra is perhaps the most significant political campaign the Congress has undertaken in recent years. The new Congress president flagging the 3,570-km walk off, if not leading it, would have been better. It confirmed the apprehensions that a non-Gandhi Congress head would not really call the shots.

For example, can anyone imagine the new Congress president asking Rahul Gandhi to tweak the yatra route? It was clear that Rahul Gandhi would continue to run the Congress without an official position, as he has done for many years.

It was the fifth mistake that the Congress high command made in the Gehlot-Pilot saga. The Congress presidential election was the last opportunity for the party to bring Pilot to Delhi and, in fact, encourage him to contest the poll to elect the new president. But perhaps the fears of Pilot being his own man and overshadowing Rahul Gandhi were too overwhelming.

Some would argue that Pilot may not have Gehlot’s experience and political sharps but a young face leading the party into 2024 would have been a wiser move. A move that would have still drawn protests from Gehlot but, maybe, the crisis (in only one of the two states where the Congress has a chief minister) would not have been this deep. The party is anyway losing election after election and leader after leader.

On the other hand, Gehlot has gone from being a loyalist to a rebel, a proposition the Gandhis would not have imagined. Or did they?

Be that as it may, nobody likes to be kicked upstairs when the promotion with little authority also allows your junior-turned-rival to take your coveted workstation. Backed by most of his MLAs, Gehlot has made it clear that he would not let Pilot become CM. Gehlot has said only those MLAs who had supported the CM during Pilot’s rebellion should choose the successor.

What Gehlot is saying is this: let the party get over its election before deciding who should rule his turf. It seems only fair, given the role of the new party president is already seen to be ceremonial.

The stakes are so high that Gehlot has run the risk of being out of the Congress presidential poll race. What Gehlot has done is this: he has challenged the high command culture; the same high command who hand-picked him to lead the party. In essence, he wants to choose the next Rajasthan chief minister. Maya mili na Ram is a regret that a veteran like Gehlot doesn’t want to have.

In Punjab, the Gandhis made a similar mess by picking Navjot Singh Sidhu as the state Congress president despite his rivalry with chief minister Amarinder Singh, leading to a similar crisis, and Charanjit Singh Channi’s appointment as the new CM. The high command may not be able to make such a move in Rajasthan because it has lost its clout further.

The resignation of Congress MLAs backing Gehlot, and Pilot’s belligerent posturing must have kept the BJP interested all this while. What didn’t happen in 2020 can come to fruition now.

We saw what happened in the neighbouring state of Madhya Pradesh where Jyotiraditya Scindia moved to the BJP along with his supporters. Goa is the latest in a series of defections that has benefitted the BJP.

Meanwhile, the Rajasthan situation is already spurring calls for Rahul Gandhi to change his mind and take over the party that is more in need of unity than the Bharat he is trying to unite with good intentions.

Was the Congress looking for such an excuse?