SIGN IN
Dark Mode
NewsNews AnalysisFIFA World Cup: How is Qatar faring in the popularity index?

FIFA World Cup: How is Qatar faring in the popularity index?

The ongoing FIFA World Cup in Qatar has been opposed by countries, players and agencies which took the human rights violation allegations and the treatment of migrant labourers from the country very seriously. India Today looks at how the country is faring in the popularity index. By Saikiran Kannan: Qatar won an unlikely world cup bid in December 2010 to host the 2022 FIFA World Cup. Back then, even terming this as controversial was seen as an understatement. Qatar outbid the United States, Australia, South Korea, and Japan. The decision was a trigger point for the implosion of FIFA. Ever since the bid winner announcement, the International Football’s governing body has seen countless allegations, bans, investigations etc in its bidding process.

Recently, even the former President of FIFA, Sepp Blatter admitted that “it was a mistake” to award the bid to Qatar which hardly had any footballing infrastructure or identity at that time and had to build most of the footballing infrastructure from scratch, specifically for this tournament. Not to forget, the schedule of International and club football has also been heavily tweaked to accommodate the first ever time the world cup was being played during winter!

But the most important aspect of the opposition to the tournament came from countries, players and agencies which took the human rights violation allegations and the treatment of migrant labourers from the country very seriously. Reports indicate that close to 6,500 migrant labourers lost their lives in the process of building the new stadiums and those that live are subjected to the harshest treatment when it came to accommodation and working conditions.

Now, with the tournament underway and reports indicating a hard set of rules for the fans to follow in the desert country, we at India Today look at how the country is faring in the popularity index. It’s important to note that Qatar has spent more than $200 billion dollars for the entire tournament and has also been working a lot on getting the PR exercises right. Qatar has roped in some of the most popular faces as its brand ambassadors. Some of the popular ones are Ex-English footballing star David Beckham, Hollywood actor Morgan Freeman, and a host of other international footballers.

Beckham especially has been subjected to numerous criticisms from those popular in the LGBTQ community as well as in football. Musa Okwonga, a popular football writer and podcaster in the UK recently commented that “I must continue to ask why David Beckham - such a proud advocate for LGBT rights earlier in his career - has nothing to say publicly about this subject in the context of Qatar now that he is an ambassador for this tournament”

He also wrote a lengthy thread on Twitter expressing his concerns about the tournament and why he feels it is already a failure.

1/ The World Cup in Qatar has already failed and its organisers know it. The goal of each World Cup is to get the bulk of its viewers to suspend their disbelief and focus on nothing but the football: that won't happen. The only question now is as to the degree of that failure. — Musa Okwonga (@Okwonga) November 4, 2022

Sentimental analysis of posts on social media across platforms

Firstly, we looked at the sentimental analysis of the keyword #Qatar. This analysis is based on social media posts across Twitter, YouTube, TikTok, blogs and news articles from 16th November to 21st November. This resulted in the mining and analysis of close to 8 million posts, engaged by 83 million accounts.

The overall analysis shows that a whopping 25.9% (more than 1/4th) of posts had a negative sentiment attached to them. Most of the posts were down to:

1. Lack of Beer at stadiums

2. Reports of match-fixing by Qatar

A sizeable percentage of posts were from non-binary genders. 87% of all the posts were from those below the age of 34! Aside from the language English (55.3%), Spanish had the 2nd highest number of posts possibly reflecting the fact that they have one of the highest % of LGBTQ members in the #EU. Do note that people from Brazil, Argentina and Mexico also tend to post in Spanish, but on inspecting multiple individual trends and posts, we could see a lot of posts in support of the LGBTQ sections and most of the posts in Spanish originated from the country of Spain. Secondly, we looked at the sentimental analysis of the keyword #FIFA. The sentiments were relatively better when compared to the #Qatar keyword. It had 13.8% negative sentiments with the negative posts peaking on 20th November (FIFA World Cup opening ceremony) & 21st November (when many fans were disallowed into the stadium owing to wearing LGBTQ colours and carrying banners supporting the Iran protests). In terms of demographics, posts on #FIFA had USA, South Korea, India, Spain, and Indonesia as its top 5 countries from where posts originate from. South Korea was more to do with singer Jungkook from BTS performing at the opening ceremony of the FIFA World Cup 2022. Finally, come what may, football lovers will always continue to love the sport. Football will always be a game people love unconditionally. Hence, the keyword #FIFAWorldCup was mostly positive when it comes to the sentiments attached. Only 6.5% of the posts were negative! Even the negative posts on #FIFAWorldCup were only on the below topics that are not really connected to the politics surrounding Qatar of FIFA but only related to the game:

1. Posts on the injury of Karim Benzema (French striker)

4. Posts against the Iranian regime during England versus Iran game

The fans have let us know that the game is of utmost importance and that criticism against FIFA or Qatar does not result in the loss of love for the game!

Aside from the critics of the tournament and high-profile football players and coaches like Philip Lahm, Jurgen Klopp, Harry Kane and Bruno Fernandes, people have also been trending the hashtag #BoycottQatar2022 extensively ever since the start of the tournament last Sunday. Not surprisingly, the trends are being led by people in the EU. Germany amounts to 23.4% of the trends, while the French take the second spot with 20.6% of the trends. The USA, India and the UK take the next three spots. In terms of popular topics part of this trend, Gianni Infantino, who is the current President of FIFA has come under heavy criticism for criticizing the Europeans and bending down to every single rule put down by the Qatari government. Secondly, LGBTQ and Human rights allegations play a major part. Finally, the ban on wearing “One Love” armbands by teams like England and Wales has been subjected to heavy criticism. Nine nations, including England's Harry Kane and Gareth Bale of Wales, had planned to wear the rainbow symbol, OneLove, on their kits to promote diversity and inclusion – but have been prevented from doing so owing to FIFA threatening them with sanctions. The players were told that they will be given yellow cards if they go against the directive. To show some solidarity, some BBC journalists wore these bands before the England – Iran game last evening. Many from the EU were against the Human rights violations in Qatar while accounts in India were livid with noted terror preacher Zakir Naik being invited to the tournament to give sermons across Qatar for incoming Muslim fans from across the world. The methodology and the summary of the analysis

The extensive analysis carried out involved mining trends and posts across social media platforms between 16th November and 21st November. 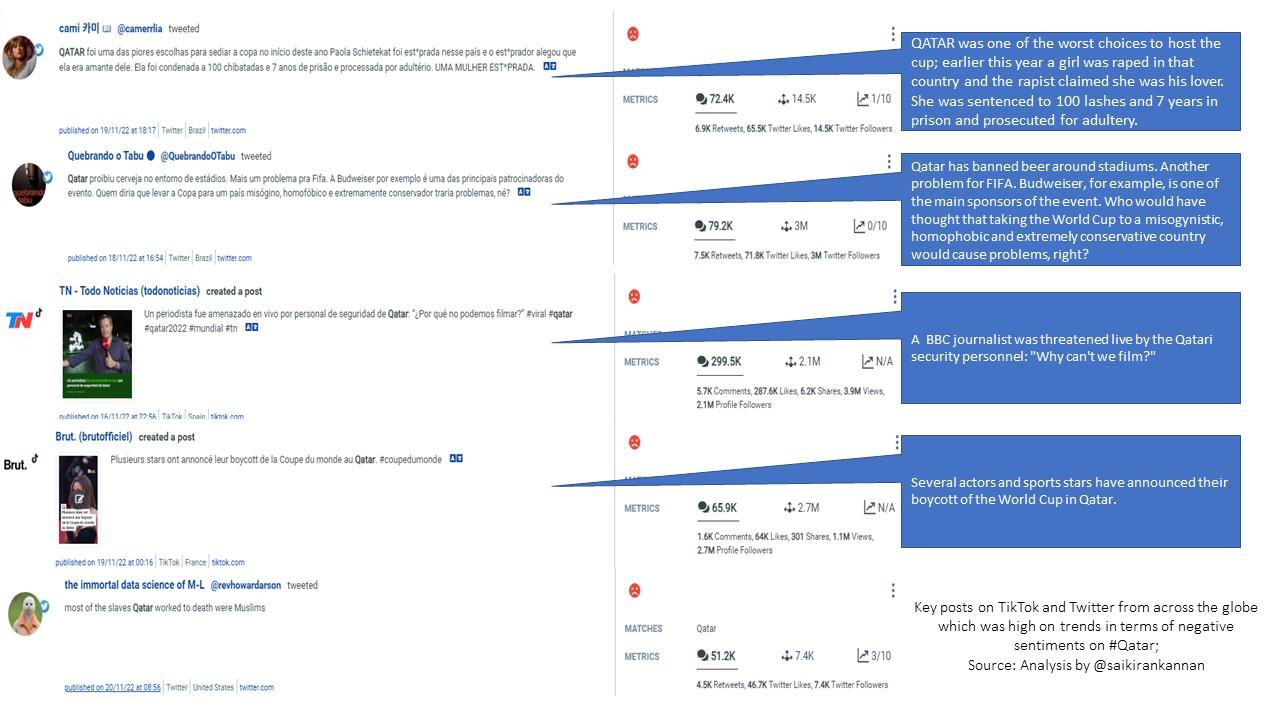 The degree of positivity or negativity expressed towards a topic, person, or entity is determined by scoring each of those words. A word list—a list of words created for each language which rates words with an integer between minus five (negative) and plus five (positive)—is created. Once a sentence or a post is parsed upon extraction from Twitter, it can be scored based on the word lists which will eventually give a positive, negative, or neutral score (0). Based on this, we can determine if a post has a positive connotation or not. 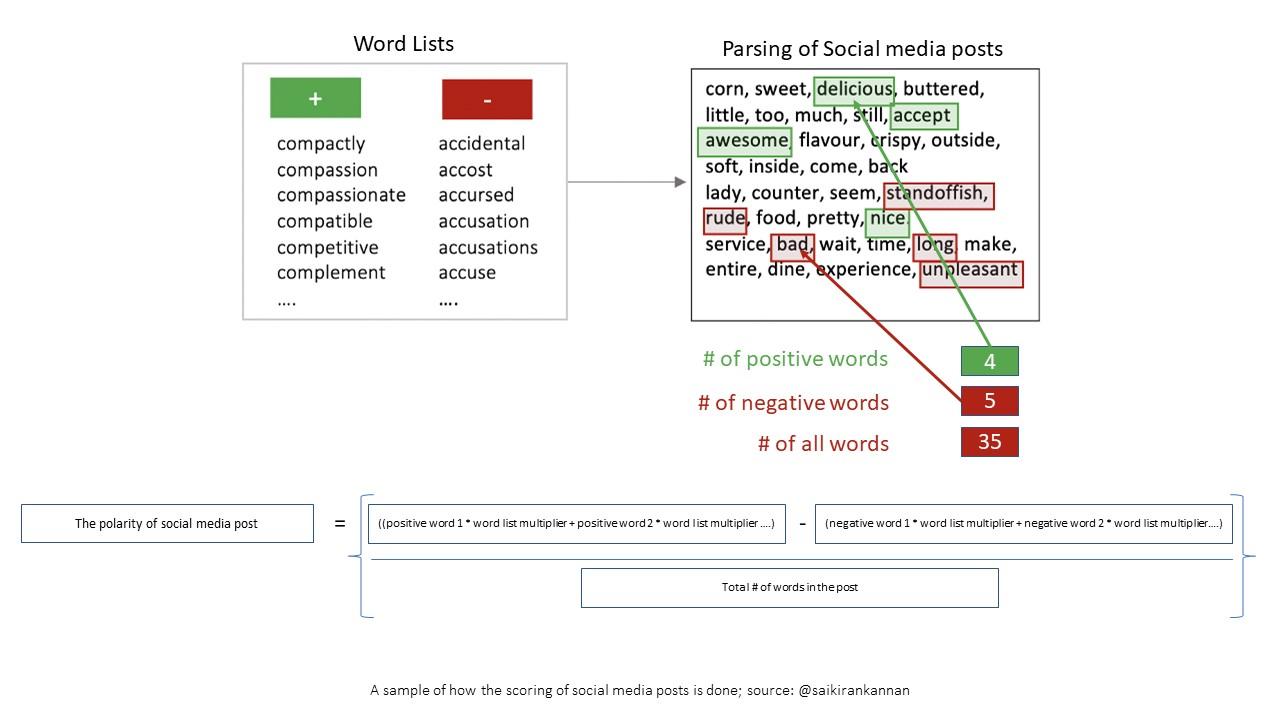 Secondly, even emojis are given scores (positive and negative) and based on this, they are analyzed to identify additional sentiments attached to posts, grouping them into positive, negative, and neutral. On top of this, we also manually analyzed a small group of samples (tweets and posts) to ensure the algorithms and the methodologies were working fine. Based on the analysis, it would be safe to assume that Football will take the centre stage during this tournament; however, a considerable portion of the conversation will also continue to be focused around some of the controversial topics associated with Qatar.