Gujarat election: In the name of Modi

Leaving nothing to chance, the prime minister himself is leading the charge in his home state and has become the trump card for the BJP. A cover story by India Today magazine on Gujarat assembly polls 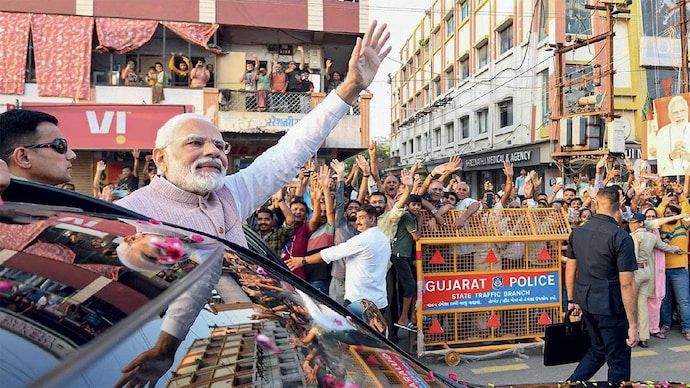 They had gathered in large numbers at the venue of the election rally at Navsari, an hour’s drive from its twin city, Surat. All were wearing saffron-coloured Gandhi topis that had the legend ‘BJP’ embossed on them; many were carrying cardboard cutouts of his face, holding them up for everyone to see. The sight and sound of his helicopter landing some distance away set off a frenzied chant from the multitude. “Modi, Modi, Modi,” they screamed, the incantation reaching a deafening crescendo when he stepped on to the podium to greet them. It has been close to nine years now since Narendra Modi gave up his chief ministership to assume the mantle of the country’s prime minister and yet he is greeted with the same adulation and affection as he was when he was at the helm of the state for a record 12 and a half years. Modi evokes in them that rare quality called Gujarati asmita (pride in identity). His party has remained unbeatable in state elections since 1995; since 2002, it has flowed from this conflation of Modi with Gujarat.