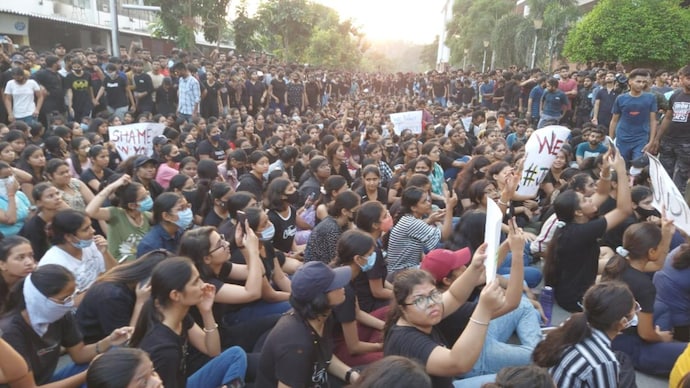 By Manjeet Sehgal: Sanjeev Singh, the Army man arrested from Arunachal Pradesh in connection with the Chandigarh University MMS scandal, was in love with the student who was allegedly making videos of women showering in the hostel. Singh reportedly told the Mohali Police about his relationship with the accused.

The Army personnel and the accused met on social media and exchanged their mobile phone numbers, sources told India Today TV. It is still not known whether the accused had also shared the videos with Sanjeev Singh. The police found two mobile phones of Sanjeev.

When the accused, an MBA student, was being questioned by the hostel manager, it was found that someone was constantly texting her.

Later, a WhatsApp chat revealed that she was chatting with Sanjeev Singh, who was allegedly asking her to send the videos and the photos. The transcript of the chat revealed that the accused was under pressure to film the videos. She even told Sanjeev that he had put her in an embarrassing situation by asking for the photos and videos since she got caught clicking the photos.

The woman, in her phone contact, used Rankaj Verma’s photo to save Sanjeev Singh’s number.

Another accused in the case, Rankaj Verma, who had claimed that he was innocent and that the accused and her boyfriend from Shimla, Sunny Mehta, were not known to him, has now filed a bail application in court.

Rankaj told the police that it was because of his DP that the cops caught him and that he was not at fault, his brother Pankaj told the media.

The police remand of the girl, her boyfriend and his friend Rankaj will be over today. The police is eagerly waiting for the forensic report of the mobile phones and girl’s laptop which will reveal whether she clicked the photographs and made the videos.

On September 18, massive protests erupted inside the Chandigarh University campus after students alleged that “private” and “objectionable” videos of several women hostel residents were leaked on the internet.

So far, the Punjab Police has arrested four people in the case. According to sources, Sunny Mehta and Rankaj Verma allegedly threatened to leak private videos of the woman unless she filmed other students.