When Bhagwant Mann pledged to quit alcohol on mother's advice

Bhagwant Mann, who is in the news due to allegedly being deplaned over his 'drunken state', had promised to quit alcohol back in 2019 -- in the presence of his mother. 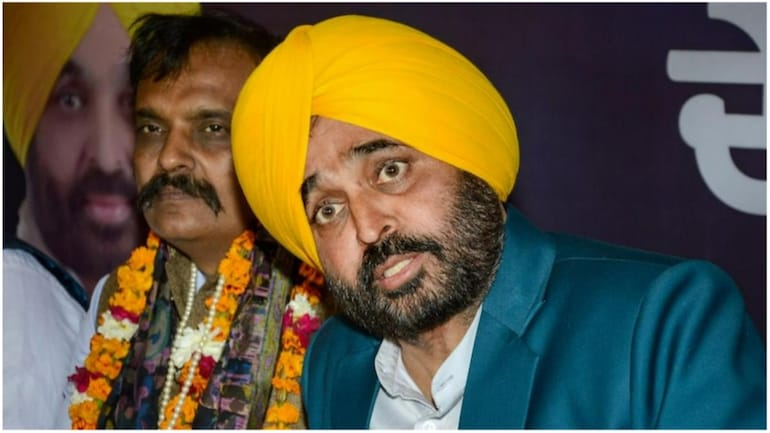 Opposition parties have alleged that Bhagwant Mann was deplaned because he was "too drunk to walk". (Photo: PTI/File)

Punjab Chief Minister Bhagwant Mann is back in news due to alcohol. Citing some reports, the opposition parties have alleged that Bhagwant Mann was deplaned when he was boarding a flight back to India from Germany as he was "too drunk to walk". The Aam Aadmi Party has refuted the allegations, claiming that the Punjab CM returned as per his schedule.

Reports claimed that due to Bhagwant Mann being drunk, Lufthansa's Frankfurt-Delhi flight had to be delayed. However, Lufthansa has stated that its flight was delayed due to operational issues.

The latest controversy comes three years after Bhagwant Mann, on a public stage, announced that he was quitting alcohol on the advice of his mother.

His decision was highly praised by the AAP, with party convenor Arvind Kejriwal calling it a “great sacrifice”.

Addressing a rally in Barnala in January 2019, Bhagwant Mann said he had left consuming liquor on his mother's advice.

Sharing the stage with his mother Harpal Kaur and AAP chief Arvind Kejriwal, Bhagwant Mann said, "My political opponents often level accusations against me, saying 'Bhagwant Mann takes liquor and remains intoxicated day and night'. Brothers, it always pained me when I saw old videos of myself on social media where I was being defamed."

Also Read | 'Spreading fake news because...': Kejriwal on claim that Bhagwant Mann was drunk on plane

Bhagwant Mann said he used to take liquor occasionally but his political opponents used this as an opportunity to malign him.

"Today my mother is here. She had told me that people defamed me excessively on the television and then asked me to stop drinking liquor. Now they cannot defame me," Bhagwant Mann said.

Arvind Kejriwal was all praise for Bhagwant Mann after this announcement and called it a "great sacrifice" for the people of Punjab.

"Friends, Bhagwant Mann has won my heart. Not only mine, he has also won the hearts of Punjab. A leader should be like him who is ready to make any kind of sacrifice for the people. It is not a small thing to make such a big commitment. After January 1, he says he will not touch liquor. It is a very big thing," Kejriwal had said at the rally.

BHAGWANT MANN AND HIS 'DRINKING' COMPLAINTS

Before 2019, Bhagwant Mann was often criticised by political opponents for "excessive drinking".

In 2016, suspended AAP MP Harinder Singh Khalsa complained against Bhagwant Mann to Lok Sabha Speaker Sumitra Mahajan. Khalsa had requested the Speaker to change his seat in Parliament as Bhagwant Mann, who sat next to him, was stinking of alcohol.

In 2015, Bhagwant Mann was chased out of a gurdwara in Bargari village in Punjab's Faridkot as he was allegedly drunk. A viral video showed Bhagwant Mann being heckled by villagers outside the gurdwara, who could be heard saying 'Daaru peeke aaya hai'.

CENTRE TO PROBE IF MANN WAS DRUNK ON FLIGHT

Meanwhile, the Ministry of Civil Aviation has said a probe will be ordered to check allegations that Bhagwant Mann was deplaned for being drunk.

"This was international soil. We will have to make sure we verify facts. It is up to Lufthansa to provide data. I'll certainly, based on the request sent to me, look into it," Civil Aviation minister Jyotiraditya Scindia said.

In a statement, the Lufthansa Group said its flight departed late due to “a delayed inbound flight and an aircraft change”.

However, the airline refused to divulge any details about Bhagwant Mann. "For data protection reasons we do not provide any information regarding individual passengers,” Lufthansa said in its statement.