SIGN IN
Dark Mode
NewsIndiaAaftab threatened to kill me, cut me into pieces: Shraddha told cops in 2020

A letter has surfaced that Shraddha allegedly wrote in 2020 to police in which she complained that Aaftab Ameen Poonawala had threatened to kill her and cut her body into pieces. 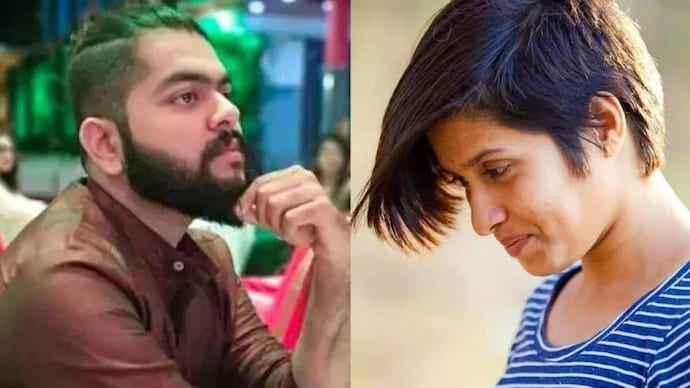 Aaftab Amin Poonawala killed her live-in partner Shraddha Walkar on May 18 in their flat in South Delhi (Photo: Aaftab (L) and Shraddha (R) )

By Divyesh Singh: Shraddha Walkar in 2020 filed a complaint with the police against her live-in partner Aaftab Ameen Poonawala, that he had threatened to kill her and cut her into pieces, India Today has learnt. In her complaint with Tulinj police station in Maharashtra's Palghar, she complained that her boyfriend, the prime accused in her murder case now, had assaulted her and threatened to kill her.

Shraddha, 27, was allegedly strangled and murdered by her boyfriend, Aaftab Ameen Poonawala, in May this year, Delhi police said. Aaftab chopped her body into 35 pieces, stored the chopped parts in a fridge and then dumped them across the national capital over several days. The couple met on a dating app in 2019 and moved in together in Mumbai and later shifted to Chhatarpur in south Delhi.

The letter has reportedly been shared by Shraddha's neighbour in Vasai, with whom Shraddha had gone to file the complaint. The Maharashtra police have also confirmed that the letter was written by Shraddha in 2020 at the Tulinj police station. 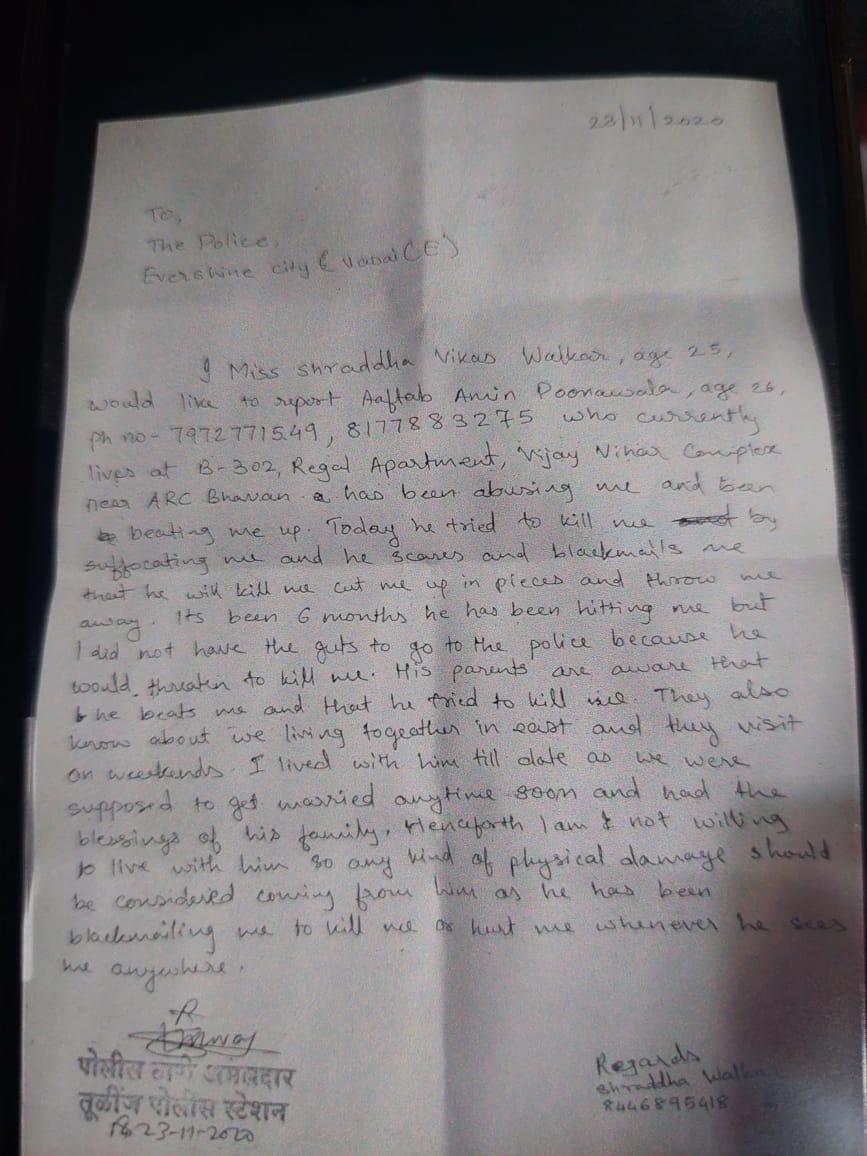 Shraddha in her complaint letter, dated November 23, 2020, wrote, "Aaftab Amin Poonawala has been abusing me and beating me up. Today, he tried to kill me by suffocating me and he scares and blackmails me that he will kill me, cut me in pieces and throw me away. But I don't have the guts to go to the police because he would threaten to kill me."

'AAFTAB'S PARENTS KNEW THAT HE BEAT ME'

Shraddha also mentioned in the letter that Aaftab's family was aware that he used to beat her and had tried to kill her.

"His parents are aware that he beats me and that he tried to kill me."It's been six months he has been hitting me," the letter read.

"I lived with him till date as we were supposed to get married anytime soon and had the blessings of his family. Henceforth, I am not willing to live with him. So any kind of physical damage should be considered coming from him as he has been blackmailing me to kill me or hurt me whenever he sees me anywhere," the letter stated.

ALSO READ | 'Dude, I have got news': Shraddha's last message to her friend on murder day

After the letter surfaced, DCP of MBVV Commissionerate, Suhas Bavache said, "The Tulinj police station, after receiving the complaint, started an investigation and then the complainant in her statement said that she had no complaint against anyone and she is taking her complaint back."

Meanwhile, Karan Brar, Shraddha's former reporting manager, has been called to Delh by investigators. Karan knew that Aaftab had assaulted Shraddha and she was also hospitalised. Karan had also helped Shraddha to file a police complaint.

Reacting to the developments, Maharashtra Deputy CM Devendra Fadnavis said, "I have seen the letter and the matter is serious. Why was the matter not investigated? This has to be probed. I don't want to blame anyone, but if action is not taken now, then such incidents will continue to happen in the future. If the matter had been investigated, then Shraddha would have been alive today."

The letter surfaced a day after Aaftab told a court that he killed his girlfriend in the 'heat of the moment'. He was produced before a Saket court in Delhi after his five-day custody expired.

ALSO READ | 'Rescue me or Aaftab will kill me': Shraddha had once sent SOS to her friend | Here's what happened next

Meanwhile, sources told ANI that Aaftab Poonawala's family is in Delhi and their statements have been recorded.

"Based on the facts that have come to light about the family, they may be questioned again. Shraddha had filed a complaint in Mumbai in 2020 that his family knows he wants to kill her," sources said.