Satellite images show the structures established by Chinese military camps near Eastern Ladakh have been removed. 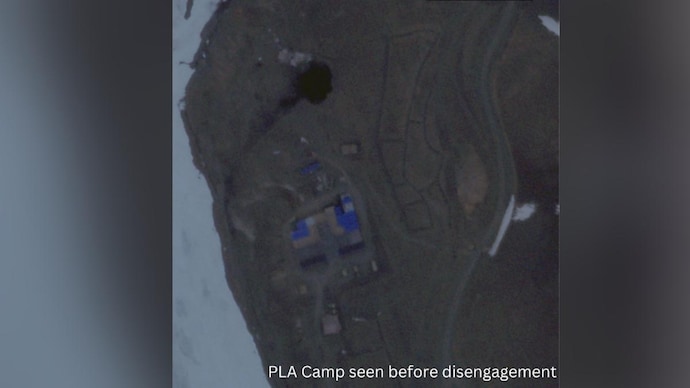 The existence of Chinese camp in the Hot Springs area was earlier reported by India Today.

By Ankit Kumar: Following the announcement of mutual agreement to disengage from the friction points in Gogra-Hot Springs area by India and China, Chinese military camps established near Patrol Point 15 (PP-15) in Eastern Ladakh have been removed. Satellite imagery reviewed by India Today confirms the dismantling of these structures set up by the People’s Liberation Army (PLA) over the past two years.

The Ministry of Defence earlier said that the process began on September 8, a week before the Shanghai Cooperation Organisation (SCO) summit in Samarkand that was attended by the Prime Minister Narendra Modi and Chinese President Xi Jinping. Officials said that a consensus was reached much earlier in the 16th round of Corps Commander Level Meeting between the two sides following which the Indian and Chinese troops in the area of Gogra-Hotsprings (PP-15) “begun to disengage in a coordinated and planned way, which is conducive to the peace and tranquility in the border areas.”

The withdrawal was reportedly completed on September 12 which was verified by the Indian and Chinese armies.

The existence of this large PLA camp in the Hot Springs area was earlier reported by India Today.

Imagery from September 13th confirm removal of large PLA camps that earlier also had military vehicles and large camouflage equipment at this location. While the available imagery covers areas in the Hot Springs near PP15, no imagery over PP16 near Gogra was available for analysis. Interestingly, the official press statement has combined the general area of Hot Springs and Gogra and focused on PP15 without giving out much details about any withdrawal from the rest of the area. Satellite image shows before and after images near Ladakh following India-China disengagement.

China already has a road network leading to the forward locations. Intelligence inputs have earlier suggested that China has been recalibrating its strategy in this area with the help of high mobility combined with armed brigades. The extremely harsh living conditions in the region have forced the PLA leadership to rotate the deployment of its divisions. The PLA has been rotating four divisions of its Xinjiang military division on a regular basis near eastern Ladakh. Division 4 and 6, earlier deployed in the region during the start of the border standoff in 2020, had been reassigned earlier this year, replacing division 8 and 11.

“I do not think I will say anything new today except I would recognise that we have had disengagement at PP-15. The disengagement as I understand was completed. That is one problem less on the border,” External Affairs Minister S Jaishankar earlier commented, in response to a question on the recent reports of withdrawal.