Delhi Deputy CM Manish Sisodia has accused BJP MP Manoj Tiwari of being involved in a conspiracy to kill Delhi CM Arvind Kejriwal. The ruling AAP will meet the poll body today to file a complaint. 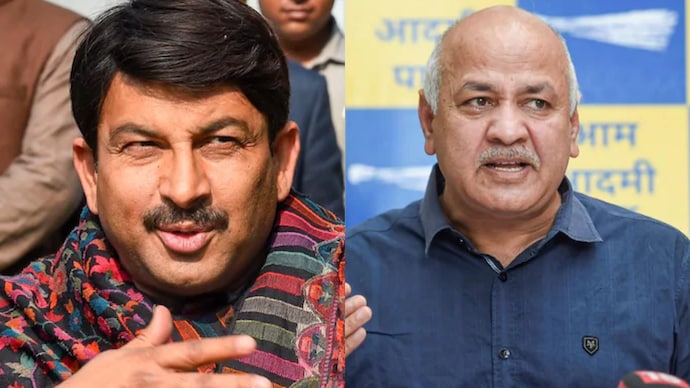 By Pankaj Jain, Amit Bhardwaj: A delegation of the Aam Aadmi Party (AAP) will visit the Election Commission on Friday as it has alleged that the BJP is hatching a conspiracy to assassinate Chief Minister Arvind Kejriwal. Delhi Deputy Chief Minister Manish Sisodia has alleged that Delhi MP Manoj Tiwari is involved in plotting to kill CM Kejriwal as the party is scared of its defeats in Gujarat and MCD polls.

As the war of words between the AAP and the BJP over a 'plot to kill CM Kejriwal' escalates, AAP spokesperson Saurabh Bharadwaj along with other party lawmakers will go to the poll body at around 12:30 pm. The party will file a complaint with Vijay Dev, Delhi State Election Commissioner, against the BJP alleging that they are hatching a conspiracy to kill CM Arvind Kejriwal.

"Manoj Tiwari has threatened CM Kejriwal, which makes it clear that the BJP is conspiring to murder Delhi CM Arvind Kejriwal. AAP will submit a complaint in the election commission and will also file an FIR," Manish Sisodia was quoted by ANI as saying.

"How does Manoj Tiwari know that an attack could happen on Arvind Kejriwal? People who are involved in this issue must be investigated," Manish Sisodia said, addressing a press conference.

'FEAR OF DEFEAT IN POLLS'

"Due to the fear of defeats in the Gujarat and MCD polls, the BJP is hatching a conspiracy to kill @ArvindKejriwal," Sisodia said in a tweet in Hindi.

"Their MP Manoj Tiwari is openly asking his hooligans to attack Kejriwal and he has done complete planning. The AAP is not scared of their petty politics and people will give a reply to their hooliganism," he wrote.

His remarks came in response to Tiwari's tweets earlier in the day, in which he had expressed concern over Kejriwal's security, while highlighting recent allegations of corruption and "selling of tickets" for the MCD polls.

On Thursday, Manish Sisodia asserted that the AAP is not scared of such petty politics. Delhi Lieutenant Governor V K Saxena has directed the city police commissioner to take cognisance of the allegations, PTI reported quoting sources.

"LG has taken note of tweets and statements by AAP leaders, including Dy CM Manish Sisodia and asked the Police Commissioner to ensure that such eventuality - orchestrated, or otherwise, does not happen, to the farthest possible extent," the sources said.