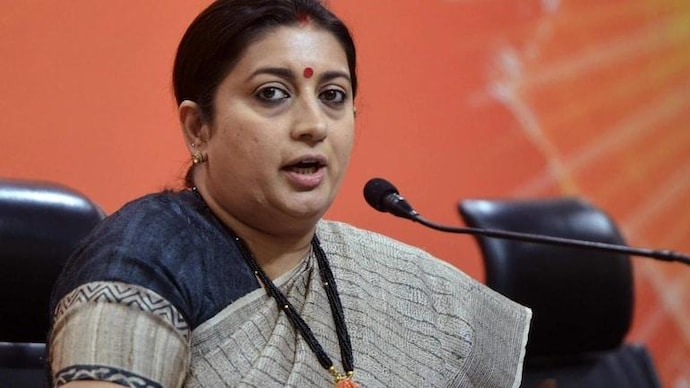 By Press Trust of India: Union Minister Smriti Irani on Saturday slammed Congress leader Rahul Gandhi for his party's 'Bharat Jodo Yatra' questioning him on who has harmed the unity of India that required the opposition party to take out such a campaign.

Making an indirect reference to Congress leader Kanhaiya Kumar, Irani also took a dig at Gandhi for being in the company of people who allegedly chanted "anti-India" slogans.

"Rahul Gandhi is on the way to unite India but he should answer first who dared to break India. You make a person a member of your party who had shouted the slogan 'Bharat Tere Tukde Honge, Insha Allah’," Irani said at Doddaballapura in Bengaluru.

She was addressing the gathering at the Bharatiya Janata Party's 'Jana Spandana' programme celebrating the ruling party's three years in office in Karnataka.

Irani expressed her shock over Gandhi's remark in Kanyakumari in Tamil Nadu that the fight is now against the structure of Indian state.

Irani, who represents Amethi Lok Sabha constituency, said, "With all seriousness, I am making this charge of sedition. I am shocked at Rahul Gandhi's statement that he is fighting against the Indian state. You have waged a war against India. I am shocked by your hunger for power."

The Union Minister for Woman and Child Welfare charged that during Congress rule in Maharashtra a terrorist's grave was beautified with marble tiles in Mumbai and that attacker was responsible for the killing of around 250 people.

Irani also alleged that when the Centre under the leadership of Prime Minister Narendra Modi was fighting against COVID-19 pandemic and succeeded in developing an indigenous vaccine, the Congress was spreading lies asking people not to use it.

She also slammed the 'sycophants of Gandhi family' for using derogatory remarks against President Droupadi Murmu, the first tribal person to hold the highest post in India.

The Union minister charged that the Congress could not "digest" the statue of iconic freedom fighter Netaji Subhas Chandra Bose being inaugurated at 'Kartavya Path' in New Delhi as the party did not issue any statement favouring the step.

Massive fire breaks out at Jamia Masjid in J&K's Drass