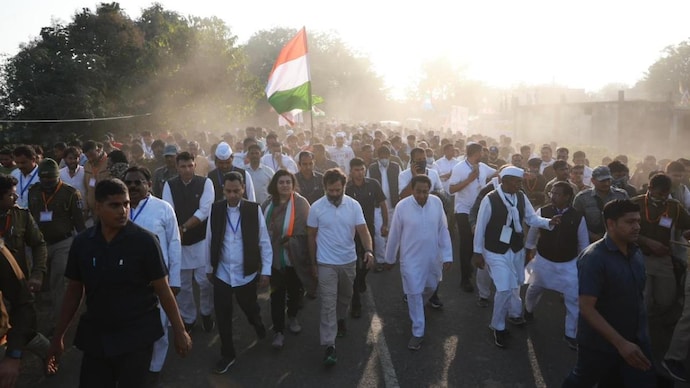 By India Today Web Desk: The Bharat Jodo Yatra led by Congress MP Rahul Gandhi entered Madhya Pradesh on Wednesday, and thereby making its way into the Hindi heartland after over two months of traversing the southern states.

A large number of Congressmen carrying the tricolour in their hands reached Bodarli village as the foot procession crossed over from Maharashtra into Madhya Pradesh.

Maharashtra Congress president Nana Patole handed over the tricolour to Madhya Pradesh party chief Kamal Nath to formally launch the 12-day-long yatra in the central state, where it will cover a distance of 380 km before entering Rajasthan.

Speaking on the occasion, Rahul Gandhi said, "This yatra is against hatred, violence and fear being spread in the country. We have started the Bharat Jodo Yatra by taking the tricolour in our hands from Kanyakumari. Nobody can stop this tricolour from reaching Srinagar."

As the Gandhi scion and hundreds of Congress workers resumed the march after a two-day break, they were joined by senior leaders Kamal Nath and Digvijaya Singh.

Leader of Opposition in the MP Assembly Govind Singh, former union ministers Suresh Pachouri and Arun Yadav among others were present on the occasion.

Later in the day, Rahul Gandhi will be interacting with banana growers and power loom workers in Burhanpur district, Congress General Secretary Incharge of Communication Jairam Ramesh said in a tweet.

Today is the 77th day of #BharatJodoYatra as it resumes from near Burhanpur in southwestern MP. Burhanpur has a long history & became an important place during Mughal rule especially during Shah Jahan's reign. The Yatra will go through 7 districts of MP over the next 11 days. pic.twitter.com/R4cEa9axYb — Jairam Ramesh (@Jairam_Ramesh) November 23, 2022

Congress general secretary in-charge of Uttar Pradesh Priyanka Gandhi Vadra along with her family is slated to participate in the Bharat Jodo Yatra for the first time. Vadra, the sister of Rahul Gandhi, will join the foot march between Burhanpur and Indore on November 24-25

The Congress has made an elaborate arrangements for the yatra in Madhya Pradesh, where assembly polls are due next year. It had lost power in the state in 2020 after a section of its MLAs quit the party.

Today, November 23, marks the 77th day of the Bharat Jodo Yatra, which commenced from Kanyakumari in Tamil Nadu on September 7.