SIGN IN
Dark Mode
NewsIndiaWhat's behind the Assam-Meghalaya border dispute?

What's behind the Assam-Meghalaya border dispute?

The recent firing incident on the Assam-Meghalaya border has put the focus on the five-decade-old boundary issue between the two northeastern states. 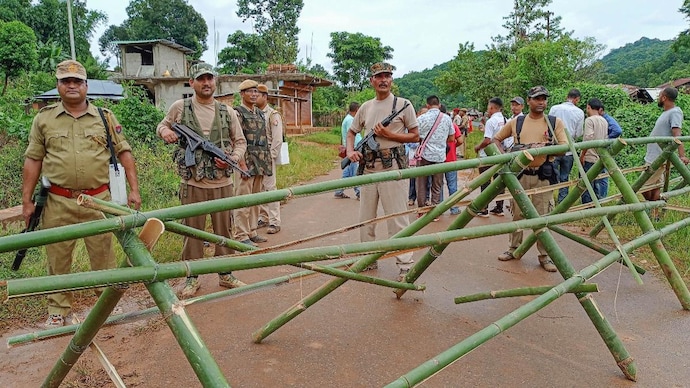 By Tirtho Banerjee: Tension gripped the Assam-Meghalaya border areas on Tuesday after six people were killed when police intercepted a truck that was allegedly smuggling timber.

The truck was intercepted at the Meghalaya border in Moikrang in the West Karbi Anglong district by an Assam Forest Department team around 3 am. As the truck tried to speed away, the forest guards opened fire at the vehicle.

A huge number of people from Meghalaya armed with ‘dao’ (dagger) and other weapons gathered at the spot. Later, the Assam government said it would hand over the probe into the violence to a central or neutral agency.

The Assam Police put up barricades at different places along the border and did not allow vehicles, including goods carriers and passenger vehicles, to enter Meghalaya except the ones with a Meghalaya registration plate.

The incident has put the focus on the border issue between the two neighbouring northeastern states.

Assam and Meghalaya share an 885-km border. In 1970, Meghalaya was carved out of Assam as an autonomous state. In 1972, Meghalaya became a full-fledged state following the Assam Reorganisation (Meghalaya) Act of 1969.

This was the beginning of the border problem as the Meghalaya government found the Act unacceptable.

As many as 12 land dispute points, along the border of these two states, have been a bone of contention. These include Langpih, Upper Tarabari, Gazang reserve forest, Hahim, Borduar, Boklapara, Nongwah, Matamur, Khanapara-Pilangkata, Deshdemoreah Block I and Block II, Khanduli and Retacherra. Six of these areas have found some type of resolution in recent times after a memorandum of understanding (MoU) was signed between the two states.

Meghalaya claims that the border problem in Langpih has been created by Assam, which has often set up police posts there. In May 2010, clashes broke out between the Nepali, Khasi and Garo communities. Assam Police opened fire on the people, wherein four Khasi people were killed and 18 others injured.

In March 2020, the Assam Police allegedly tried to set up a border outpost in Umwali in Langpih, and the local Khasi population protested against it.

In 1983, a joint official committee was formed to address the border issues. The panel recommended that the Survey of India should re-delineate the border, teaming up with both the states.

An independent panel, spearheaded by Justice YV Chandrachud, was set up in 1985. Meghalaya rubbished the report. In 1991, about 100 km of the border was demarcated with the help of the Survey of India, but Meghalaya cried foul.

In 2011, the Meghalaya Assembly passed a resolution for intervention of the Centre and the establishment of a boundary commission. The Centre asked the two governments to appoint nodal officers to discuss the dispute. In 2019, Meghalaya urged the Supreme Court to direct the Centre to resolve the dispute but the petition was turned down.

On January 29 this year, Assam and Meghalaya signed a draft resolution. It was the first step towards resolving a 50-year-old dispute.

On March 29, a historic MoU was signed between Assam Chief Minister Himanta Biswa Sarma and his Meghalaya counterpart Conrad K Sangma in the presence of Home Minister Amit Shah in New Delhi.

Also Read | 'Dude, I have got news': Shraddha's last message to her friend on murder day

The remaining six areas include villages in disputed blocks 1 and 2 transferred from the then United Khasi and Jaintia districts to Assam’s Karbi Anglong district for administrative convenience in the 1950s.

On August 22 this year, the second phase of border talks was held with the two states deciding to form three regional committees to resolve issues regarding the remaining six disputed areas.

Five principles are considered while resolving the border disputes: historical facts, ethnicity, administrative convenience, willingness and sentiments of the people concerned and the contiguity of the land, preferably with natural boundaries such as rivers, streams, and rocks.

Also Read | Will be punished for my deeds, says tantrik who killed couple in Udaipur