The MLAs of the Gehlot faction adopted a stand this evening against Sachin Pilot and his candidature to be the next chief minister if Ashok Gehlot is elected the Congress chief. By Sharat Kumar, Dev Ankur Wadhawan: Over 80 Rajasthan Congress MLAs have submitted their resignation letters to the assembly Speaker, CP Joshi, at his residence in a massive late night drama in the desert state. All the MLAs who have resigned will go to the official residence of Ashok Gehlot from the Speaker's home, sources told India Today TV.

The MLAs of the Gehlot faction adopted a stand this evening at Cabinet minister Shanti Dhariwal's residence against Sachin Pilot and his candidature to be the next chief minister if Ashok Gehlot is elected the Congress chief. Gehlot’s loyalists want the next CM to be someone who had supported the government during the open rebellion by Pilot in 2020.

All the resignations were collected at Dhariwal's home. 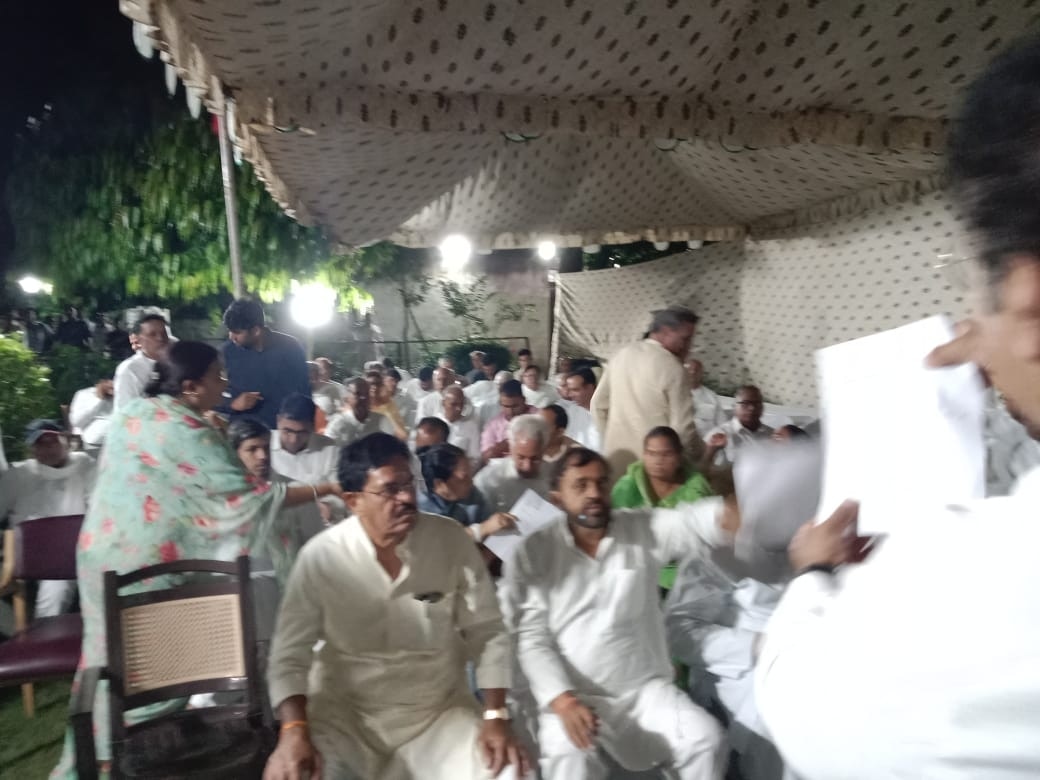 According to the sources in the Congress, Rahul Gandhi's camp has jumped into action to firefight the mammoth calamity facing the party. Senior party leader and MP KC Venugopal spoke to Mallikarjun Kharge, who, along with the party's Rajasthan in-charge, Ajay Maken, spoke with Ashok Gehlot.

"Mere bass mein kuch nahi hain (nothing is in my hands)," Gehlot reportedly had told Venugopal earlier, the sources said.

The message from Sonia Gandhi is clear: Mallikarjun Kharge and Ajay Maken should speak to each and every MLA of the party.

"Even if it takes all night, the matter must be resolved by tonight only. And pass whatever one-line resolution you want to pass": is the Congress's message to its troubleshooters.

Meanwhile, the RLD, which is in alliance with the Congress in the state, said the Congress must decide who will succeed Ashok Gehlot as chief minister.

"We have left no stone unturned in maintaining the alliance with respect to Rajasthan, nor will there be any changes in it today. If any new equation is formed after the election of the Congress president, then the decision about the post of chief minister in the state will also have to be taken by the Congress," tweeted Rashtriya Lok Dal's Jayant Singh.

MLA Shobha Rani Kushwaha, who was expelled from the BJP for cross-voting in favour of the Congress in this year's Rajya Sabha election, was also at Speaker CP Joshi's residence.

Amid this fresh and brewing crisis for the Congress, the BJP has begun tweeting, predicting the party's win in the election next year.

"The trends have started coming in. Hail BJP," tweeted Satish Poonia, the chief of the BJP in Rajasthan.

"I had once told the Congress party leadership that Ajay Maken was not worthy of being incharge of even a booth level committee. Today I have been vindicated yet again," tweeted BJP leader Shehzad Poonawalla. Ajay Maken is in charge of the Rajasthan Congress.

"Congress is overKejriwal is the alternative," tweeted Aam Aadmi Party MP Raghav Chadha, a swipe at the grand old party that is fighting tooth-and-nail to return to power in the country.

In the 200-seat state assembly, Congress has 107 MLAs, followed by the BJP with 70. The Rashtriya Lok Dal, which had lent its support to the Congress, has one member while 14 are Independent MLAs.

(With input from Supriya Bhardwaj)