Many egos got deflated at IIM Ahmedabad: Economist Ajit Ranade 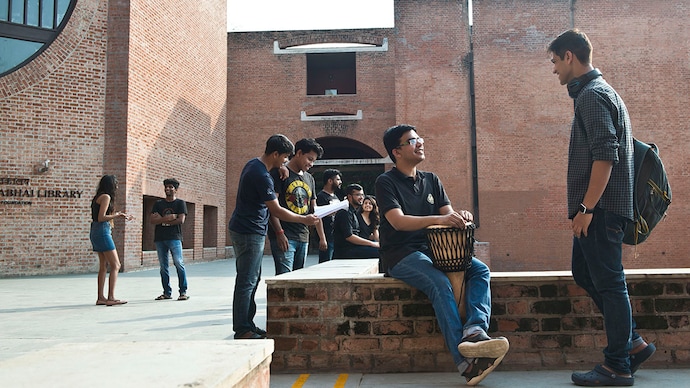 Students at the IIM-A campus

By Ajit Ranade: The founding director of the Indian Institute of Management Ahmedabad (IIM-A) was barely 38 when he was appointed. That itself is a remarkable starting point, signifying two things. One, that the authorities—guided by Vikram Sarabhai—were willing to bet on a youngster. Second, that the person chosen to lead, Ravi Matthai, who came with just a bachelor’s degree, was going to be a first among equals.

The spirit was non-hierarchical from the very beginning. There were many stalwarts who worked shoulder to shoulder with this young man. This has been an enduring feature among the faculty at IIM-A. A great sense of democratic collegiality, decision-making by consensus (even if it is sometimes preceded by fractious and noisy quarrels), and all important posts held by rotation. The pursuit of excellence in teaching and pedagogy has been relentless. Peer pressure is accepted, possibly welcomed.

Matthai stepped down as director in 1971 after nearly a decade of success. He insisted on change, and he emphasised that stepping down be seen as completely normal. And he did not move on to bigger things but continued to remain as just another faculty member. Just like him, many of his colleagues from the founding team have left a lasting impact on the culture and very essence of the institute. Some faculty are considered as legends among students.

One such is Abhinandan Jain, professor of marketing, who has been at the institute for 50 years, first as a student, and having taught 44 batches. Alumni flew down from around the world to felicitate him recently on his 75th birthday. His method was the quintessential case study approach, which IIM-A follows to this day. It sharpens holistic thinking. Many “quants” have found their Waterloo in IIM-A classrooms, and many gold medallists got their egos deflated in the very first term. Some have been fortunate to find their life partners, while others have discovered their true calling during those memorable two years on campus.

This Well-Known Institute in Western India (WIMWI, in the institute’s lingo and in all the case material) continues to be a beacon that attracts some of the brightest minds and has produced some extraordinary leaders.

—The writer is an economist and V-C of the Gokhale Institute of Politics and Economics, Pune. He graduated from IIM-A in 1984