SIGN IN
Dark Mode
NewsFact CheckFact Check: Has RaGa marched ahead of Modi in popularity with #BharatJodoYatra?

Fact Check: Has RaGa marched ahead of Modi in popularity with #BharatJodoYatra? Viral survey is misleading The basis of the claim that Rahul Gandhi’s social media popularity has surpassed that of Prime Minister Narendra Modi is a screengrab of a Times Now bulletin.

By Jyoti Dwivedi: Has Congress’s Bharat Jodo Yatra catapulted Rahul Gandhi’s social media popularity so much that it has surpassed that of Prime Minister Narendra Modi? That is what some people seem to be claiming. Purportedly, the ambitious cross-country march has garnered massive “positive sentiment across Twitter” for the former president of the party.

The basis of this claim, as can be seen in tweets, is a screengrab of a Times Now bulletin. In it, an anchor can be seen explaining a graph titled, “Sentiment comparison of key individuals,” and “Positive sentiment across Twitter.”

The bar graph on the screen placed Rahul Gandhi at the top with 66 per cent. PM Modi stood second with 15 per cent. This was followed by West Bengal Chief Minister Mamta Banerjee at seven per cent, Akhilesh Yadav at five per cent, and Delhi Chief Minister Arvind Kejriwal at four per cent. The archived version of one such tweet can be seen here. AFWA found that the viral screenshot is not recent at all. It’s from 2017 and thus not related to the Bharat Jodo Yatra. The screenshot was also digitally manipulated.

We noticed that in responses to such tweets, many claimed that the graph was from the 2017 assembly polls in Gujarat. The elections in the state were held on December 9 and 14, 2017, and votes were counted on December 18, 2017.

Subsequent searches led us to the actual report from which this screenshot was taken. It was shared on the YouTube channel of Times Now on December 17, 2017.

On comparing the viral screenshot with a screengrab from the original video, one can easily deduce that the former was taken from this video. However, the Times Now report did not have photos of Akhilesh Yadav, Mamata Banerjee, and Arvind Kejriwal on the bar graph. Instead, it featured former Gujarat Chief Minister Vijay Rupani, now-Bharatiya Janata Party leader Hardik Patel, and independent MLA Jignesh Mevani. As per the report, Gandhi’s popularity on Twitter had surpassed PM Modi’s at the time. It is noteworthy, however, that the BJP won the polls.

HOW HAS '#BHARAT JODO YATRA' FARED ON SOCIAL MEDIA?

We looked into the historical data of Twitter trending hashtags using the GetDayTrends tool. t revealed that “#BharatJodoYatra” trended at number two on September 7, 10, and 11. Aside from that, hashtags related to the Congress campaign like “#__” (Smriti is a Liar), “#____” (Not Knickers, Inflation is the Issue), “#___” (India is Unifying), and “#___” (Rahul Gandhi Unites) were also among the top trends on September 12, 14, and 26.

Interactions on the posts of the official Facebook page of the Bharat Jodo Yatra rose sharply on September 7, as per CrowdTangle. 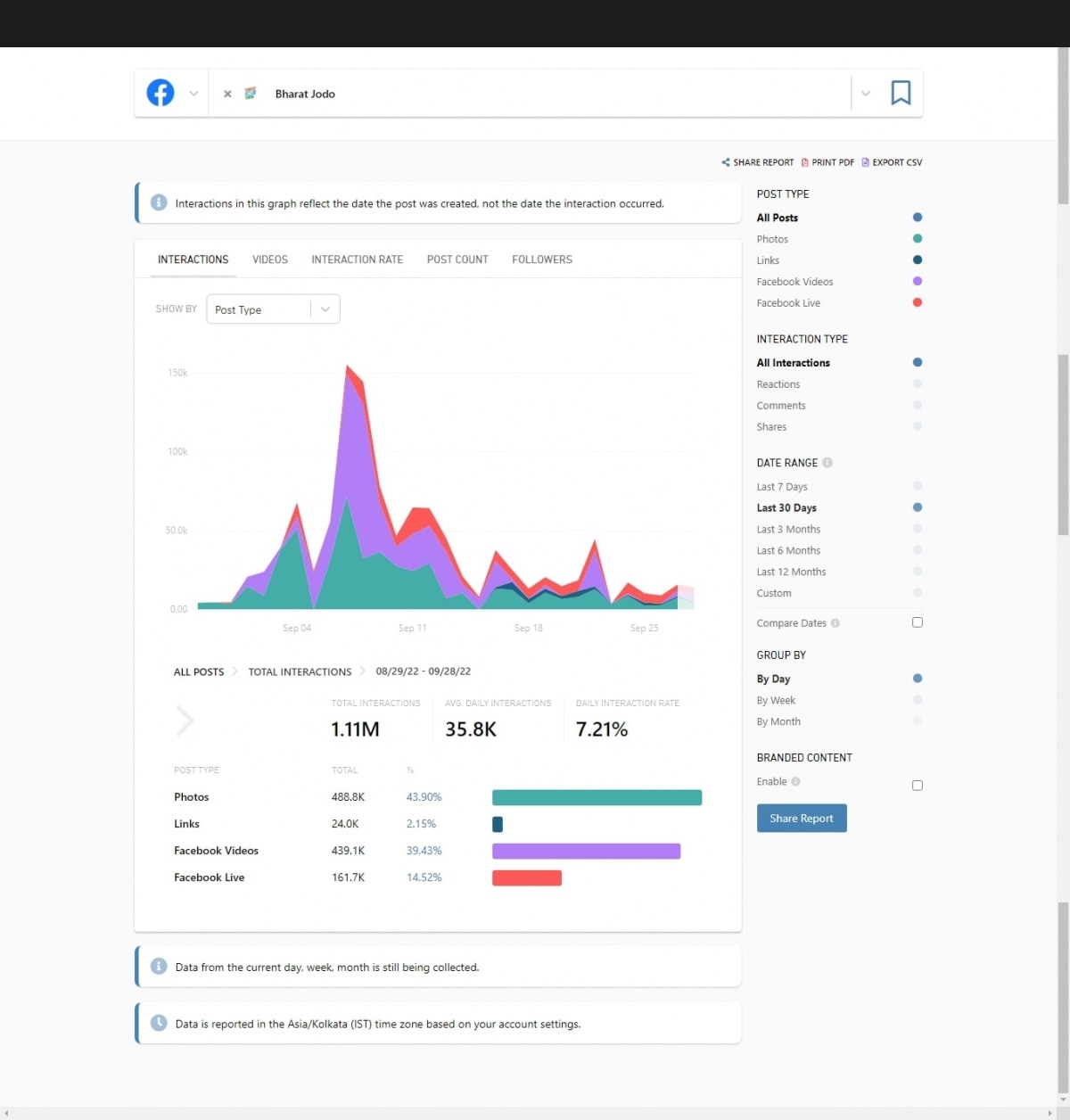 Using the online tool Talkwalker, we found that the hashtag “#BharatJodoYatra” had garnered an engagement of 47 Lakhs in the past week on different platforms. Per it, while 26.4 per cent of the “sentiments” associated with this hashtag were positive, 15.8 per cent were negative. However, it is important to note that various tools measure sentiments differently and their analyses can vary significantly. 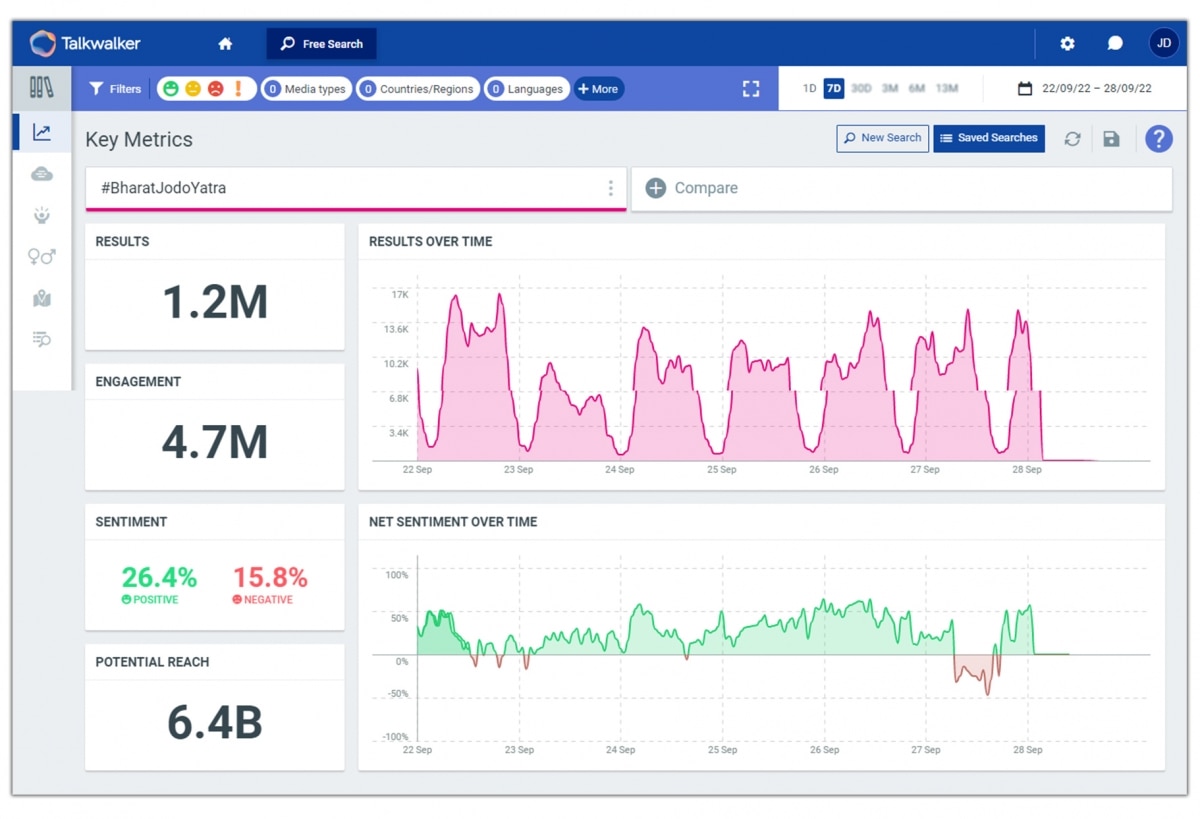 Since the Yatra began on September 7, there has been a spate of misinformation surrounding it. AFWA's fact-checks of some such claims can be seen here and here.

This TV news screengrab shows that since the Bharat Jodo Yatra began, there has been an increase in ‘positive sentiment across Twitter’ for Rahul Gandhi.

Not only is this screenshot old but it has also been digitally manipulated. The original news report was aired in 2017 during assembly polls in Gujarat.