Fact Check: The GOAT asked to embrace Islam? Viral video of Messi and Al-Bulayhi is doctored The audio of the conversation between two cricket players was added to this viral video.

By Fact Check Bureau: Saudi Arabia on November 22 clinched a remarkable victory over Argentina at the opening game of the FIFA World Cup 2022. This triumph against one of the world’s top-ranked teams was followed by the announcement of a snap public holiday on November 23 in its celebration. Videos of jubilant Saudi football fans celebrating this massive victory have been flooding social media platforms ever since.

Amid the celebrations, a video that has been making the rounds on Facebook and Twitter shows a confrontation between two players from the two teams during this much-talked-about match. If the viral video is to be believed, it shows Saudi defender Ali Al-Bulayhi asking Lionel Messi to embrace Islam in the middle of the match.

Al-Bulayhi can be seen approaching Messi in the video, giving him a pat on his back, following which he can be heard saying, “If you non-Muslim, and you turn Muslim, no matter whatever you do in life, straight to heaven.” Following this, the conversation becomes inaudible for a few seconds as Messi looks away and chuckles. Towards the end, Al-Bulayhi can be heard saying, “Be ready for the fire,” before concluding the conversation. 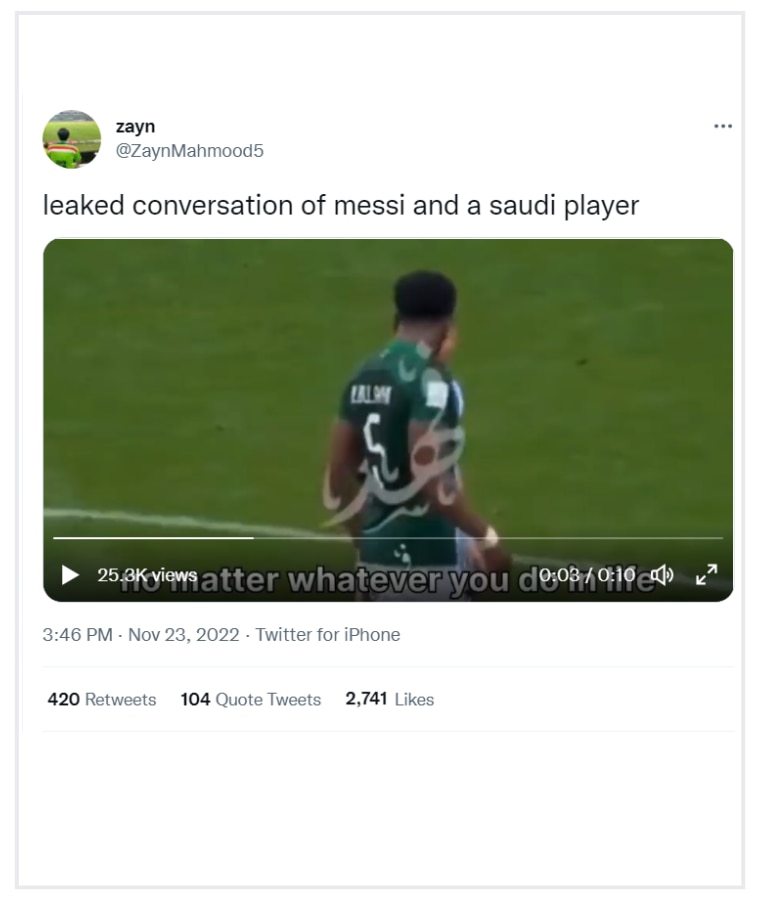 Archives of social media posts showing this supposed conversation between the rival players can be found here, here and here.

AFWA found that this video is doctored. The audio of the conversation between two cricket players from an eight-year-old match was added to the video of the Saudi defender and Messi.

With the help of a keyword search, we found a 2014 Hindustan Times report titled “Pakistan opener asks Dilshan to embrace Islam.” It stated that on August 30, 2014, Pakistan cricketer Ahmed Shehzad was caught on camera asking Tillakaratne Dilshan, a Sri Lankan cricketer to embrace Islam. This happened in 2014, during the last one-day international match of Pakistan's tour of Sri Lanka. The report contained the exact words spoken by Shehzad, which were the same as what can be heard in the viral video.

ABP News, on its YouTube channel, shared the clip from the match showing Shehzad making his religious pitch to the Sri Lankan player as they were exiting the field. It is worth noting, that the conversation taking place between the players in this video matches that in the viral video beat for beat.

The comments by the Pakistan batsman were investigated by the Pakistan Cricket Board, who summoned Shehzad for an explanation and also issued him an official reprimand. The Sri Lankan cricketer was, however, unconcerned about the religion-focused comments and did not lodge a complaint regarding the incident. Shehzad, on the other hand, dubbed the conversation a “personal chat” with Dilshan.

This confirms that the audio from a 2014 cricket match has been digitally added to the clip going viral.

But what happened between Messi and Al-Bulayhi?

A keyword search about the recent confrontation between Messi and the Saudi player led us to reports about Al-Bulayhi approaching Messi by slapping his back and shouting at him in the middle of the match. The visuals of the viral clip were shot immediately after Saudi Arabia took a shock lead with two goals in five minutes at the start of the second half. This is when Al-Bulayhi decided to turn and shout at Messi. The report also shared a tweet featuring the actual clip from the match. The conversation between the two, however, could not be heard in it.

After the game, the Saudi defender revealed that he squared up to the Argentina legend and screamed: "You will not win, you will not win,” a prediction that came true.

Thus, it is clear that a doctored video was shared with misleading claims about a conversation between the two players.

Saudi defender Ali Al-Bulayhi asked Lionel Messi to embrace Islam in the middle of the match during the FIFA World Cup.

This video is doctored. The audio from a 2014 Pakistan-Sri Lanka cricket match was added to the video of the Saudi defender talking to Messi.