After the Donyi Polo Airport was inaugurated by PM Modi recently, several people claimed that it took more than seven decades of India’s independence for the northeastern state to have an airport. AFWA's investigation found these claims to be misleading. AFWA's investigation found these posts to be misleading.

By Riddhish Dutta: On November 19, Prime Minister Narendra Modi inaugurated Donyi Polo Airport in Itanagar, the capital of Arunachal Pradesh. Since then, several people on social media have made the surprising claim that it took more than seven decades of India’s independence for the northeastern state to have an airport.

With a sarcastic jab at the Congress party’s Bharat Jodo Yatra, some the photo of an airstrip with captions like, "This is the real 'Bharat Jodo'. The first ever airport has been built in Arunachal Pradesh since independence." The archived version of such a post can be seen here. 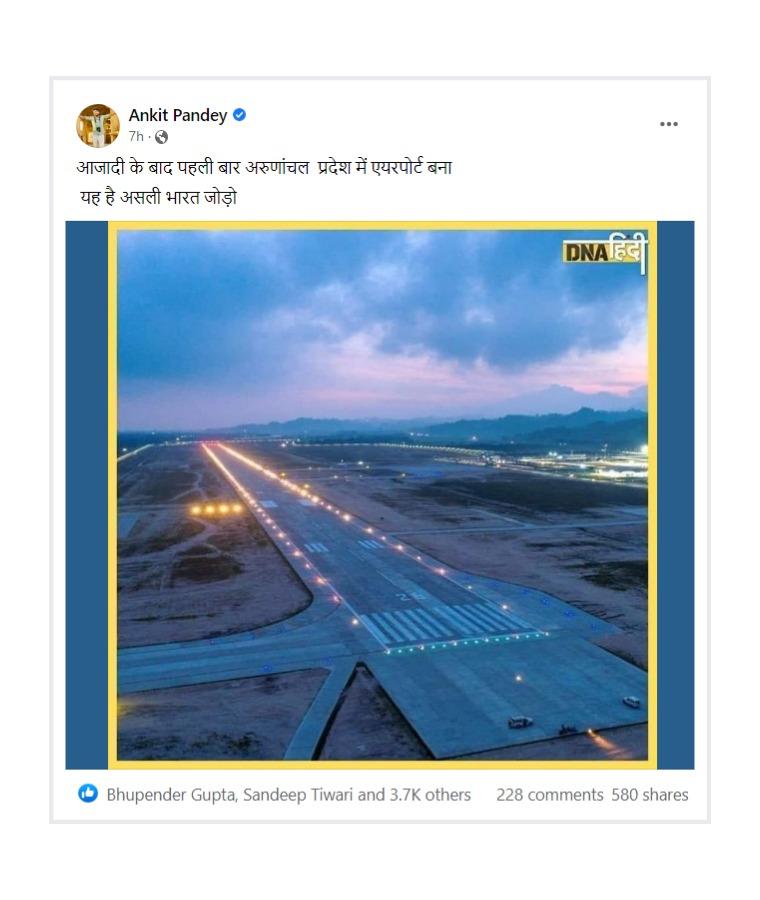 AFWA's investigation found these posts to be misleading. Donyi Polo is not the first commercial airport in the state but is the first greenfield airport. There are two more existing operational airports in Arunachal Pradesh.

When we reverse-searched the photo of the airstrip, it took us to an NDTV report published on November 18, a day before the inauguration of Donyi Polo Airport. The report mentioned that the airport will be the first greenfield airport in Arunachal Pradesh and the first in its capital city Itanagar. 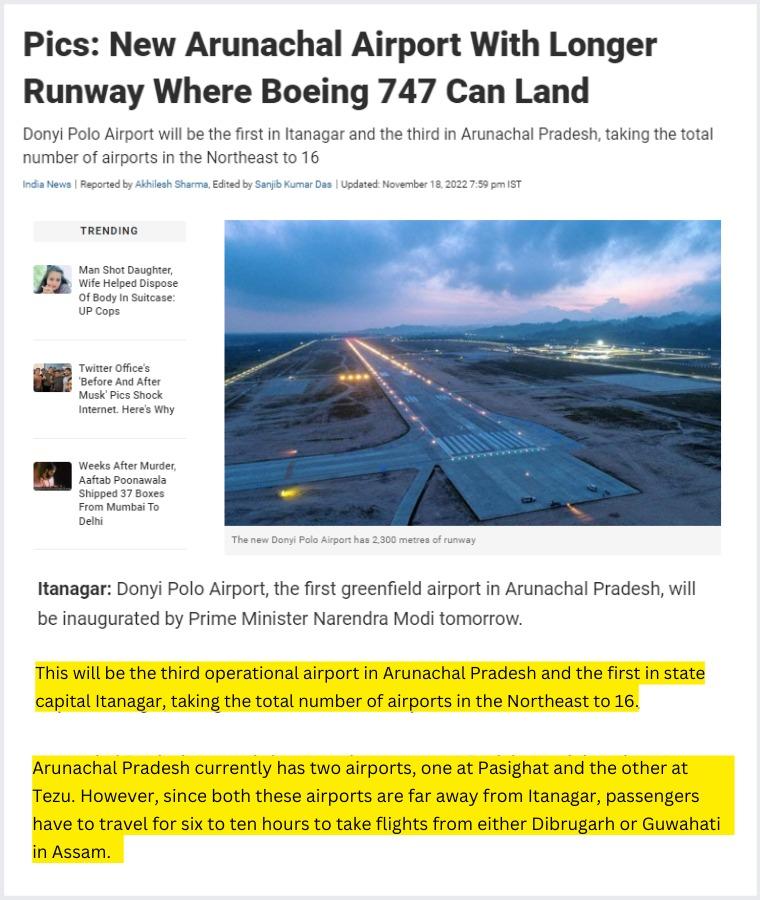 It further noted that this will be the third operational airport in Arunachal Pradesh after Pasighat and Tezu. Despite the presence of the other two airports, however, passengers often opt for either Dibrugarh or Guwahati in Assam due to the long travel time needed to reach these airports, the report added.

Per a press release from the Prime Minister's Office, PM Modi said that Donyi Polo Airport will be the fourth operational airport in Arunachal Pradesh, taking the total airport count in the North-East region to 16 during the inaugural event. The official data provided by the Airport Authority of India, however, contradicts the claim made in the Press Information Bureau press release — it showed Zero Airport or Ziro Airport, the fourth airport as “non-operational.” Pasighat and Tezu airports were 'operational' per this chart. The Hindu reported on May 21, 2018, that after Arunachal Chief Minister Pema Khandu flew to Pasighat airport from Kolkata via Guwahati with some other passengers, it became the last of the eight northeastern states to enter India's aviation map. An Indian Express fact-check report noted, however, that it was during the 1980s when the first-ever commercial flight touched down in Arunachal Pradesh.

On February 9, 2019, Zee Biz reported that Prime Minister Modi inaugurated the Tezu airport and laid the foundation for the construction of a greenfield Airport at Hollongi, Itanagar.

Therefore, it is more than clear that Donyi Polo is not the first airport to be built in Arunachal Pradesh following India's independence.

Arunachal Pradesh got its first-ever airport post-independence after Donyi Polo was inaugurated by PM Narendra Modi on November 19.

Donyi Polo is the first greenfield airport in Arunachal Pradesh. The northeastern state has two more operational airports, Pasighat and Tezu, inaugurated in 2018 and 2019.