As the Congress party’s Bharat Jodo Yatra campaign reached its twentieth day, a video of Rahul Gandhi at a Hindu religious ceremony was shared widely. 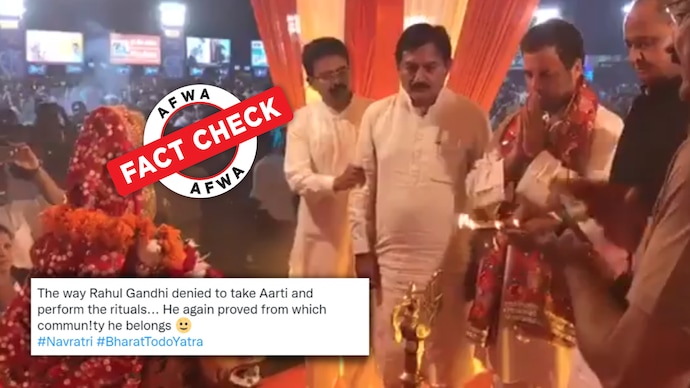 The Congress party’s ambitious Bharat Jodo Yatra led by Rahul Gandhi has been all over the news and social media since it started on September 7. As the campaign reached its twentieth day, a video of Gandhi at a Hindu religious ceremony was shared widely.

People claimed that the Congress leader refused to perform aarti, a Hindu ritual, during religious events. In the video, two men standing on either side of Gandhi could be seen performing aarti. Gandhi, however, did not. AFWA found that the viral video was clipped. Multiple images and videos from the event confirmed that Gandhi had indeed performed aarti.

With the help of a reverse image search and relevant keywords, we found a longer version of the video shared by India Today journalist Supriya Bhardwaj on September 27, 2017.

At the beginning of this 52-second-long video, Gandhi could be seen performing aarti. He then passed the lamp to Rajasthan CM Ashok Gehlot. This part of the video was not there in the viral clip. According to Bhardwaj’s tweet, the video was shot at a Garba pandal in Rajkot, Gujarat.

Many others shared the same video on social media in September 2017. Photos from the event were also shared by ANI and Rahul Gandhi himself. Both tweets featured photos of Gandhi holding the aarti lamp.

We also found multiple media reports from September 2017 about Gandhi performing aarti at Garba venues in Rajkot and Jamnagar. He was on a three-day tour in Gujarat ahead of the 2017 assembly elections in the state.

Thus, it is evident that a clipped video from a 2017 event attended by Rahul Gandhi was circulated with misleading claims.

(With inputs from Sanjana Saxena)

This video is clipped. In the extended video shot in Rajkot, Gandhi could be seen performing aarti. Other photos from the same event show the same.