Fact Check: Did an African activist interrupt Queen’s funeral? Viral video is from 2007

A video supposedly shot at the funeral ceremony of Elizabeth II at the Westminster Abbey shows a man yelling at the congregation and disrupting the service.

A video supposedly shot at the funeral ceremony of Elizabeth II at the Westminster Abbey shows a man surrounded by security guards, yelling at the congregation and disrupting the service.

A video supposedly shot at the funeral ceremony of Elizabeth II at the Westminster Abbey shows a man surrounded by security guards, yelling at the congregation and disrupting the service. He was eventually seen being escorted out by security. The man could be heard shouting the word “Disgrace”. A commentator in the video said that the man demanded England formally apologise for its participation in the transatlantic slave trade.

On Facebook, the video was shared with a rather detailed caption. It said, “A yet-to-be-identified African had interrupted the funeral of the late Queen as he stood up before the World's Presidents and demanded that the British government should apologize to Africans for their role in the slave trade since the late queen could not do that before her death. Before he was led out by security agents, he took a swipe at the British PM calling him a 'disgrace'.”

Archives of such posts can be found here, here and here.

AFWA has found that this video is from 2007. Thus, unrelated to Elizabeth II’s funeral.

Reverse searching the frames of this video led us to a report by the Express. It contained an extended version of the viral video.

According to it, the man in the video was Toyin Agbetu, and the incident took place during a ceremony that marked the 200th anniversary of the Abolition of the Slave Trade Act 1807, an Act of the Parliament of the United Kingdom that prohibited the slave trade in the then British Empire.

Agbetu is a British-Nigerian social rights activist, community educator, and filmmaker. He founded the African human rights organisation Ligali which works to challenge the misrepresentation of African people in the mainstream media.

On the Facebook page of the Ligali, we found a 2007 documentary film called “The Walk”, directed by Agbetu himself. It shows the confrontation, followed by Agbetu’s arrest outside the church, the media coverage, and what happened afterwards.

We also found a BBC news report, on the incident. The queen, her husband Prince Philip, and the then prime minister Tony Blair could be seen in attendance.On April 3, 2007, Agbetu penned for the Guardian his side of the story. He wrote, “I was moved to make a collective voice heard at the commemorative ritual of appeasement and self-approval marking the bicentenary of the British parliamentary act to abolish what they disingenuously refer to as a ‘slave trade’.”

Thus, we conclude that the clip does not show Elizabeth II’s funeral being disrupted by a protestor. This incident took place in 2007. 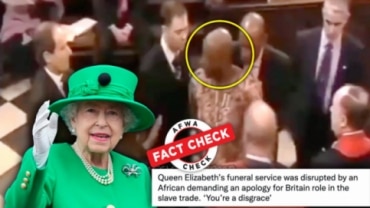 ClaimQueen Elizabeth’s funeral service was disrupted by an African protestor demanding an apology for Britain’s role in the transatlantic slave trade.ConclusionThis video is from 2007 and shows a British-Nigerian activist demanding an apology during a ceremony celebrating 200 years of the Abolition of the Slave Trade Act 1807.

The number of crows determines the intensity of the lie.