Citroen has launched the facelift for the C5 Aircross at Rs 36.67 lakh. We took it around for a spin to find out how significant the changes are. 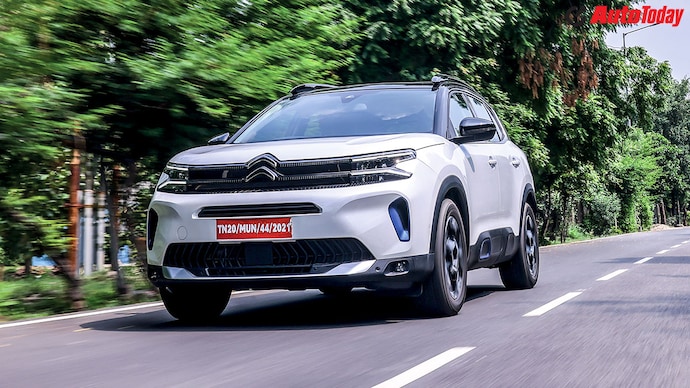 The facelifted Citroen C5 Aircross gets tweaks to the exterior and the interior but remains mechanically the same.

By Anagh Bhaskar: Since Citroen made its debut in India with the C5 Aircross, its competition has increased in the form of the new Hyundai Tucson and the Volkswagen Tiguan. Now the French marque has given the C5 a facelift which brings changes to the exterior, interior and equipment list. Mechanically, however, the 2022 Citroen C5 Aircross has remained the same and uses the same diesel motor. We took the SUV for a drive and to find just how much has changed, and what these changes mean as a package for the C5, read on. 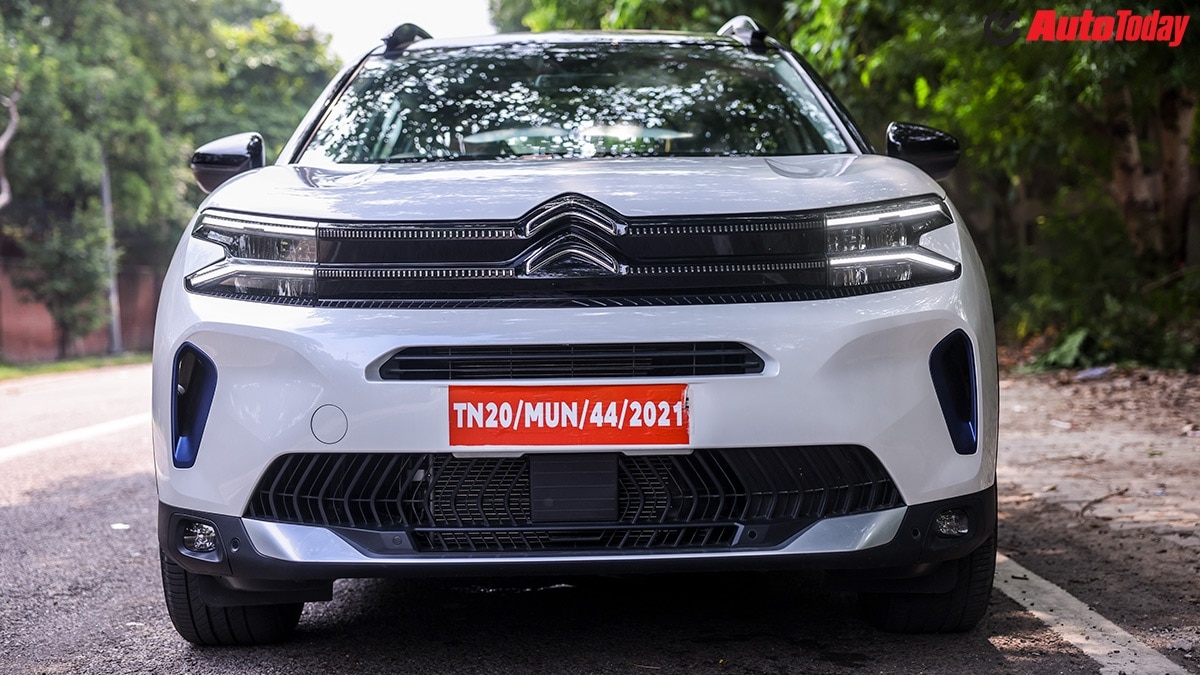 Updated front end gets a new headlamp design with integrated LED DRLs. The bumper and grille have been revised as well.
advertisement

The SUV exudes premiumness and this facelift only ups that quotient. The front fascia features the brand's double Chevron design element, which starts at the more prominent logo in the middle of the grille and then extends to both sides in the form of two lines. The headlamps and the daytime running lights, both LEDs are in a single unit which replaces the earlier split configuration. The rectangular faux air intakes on the lower bumper have been replaced with a mesh lower grille, while the vertical slats which serve as the air intakes are larger. 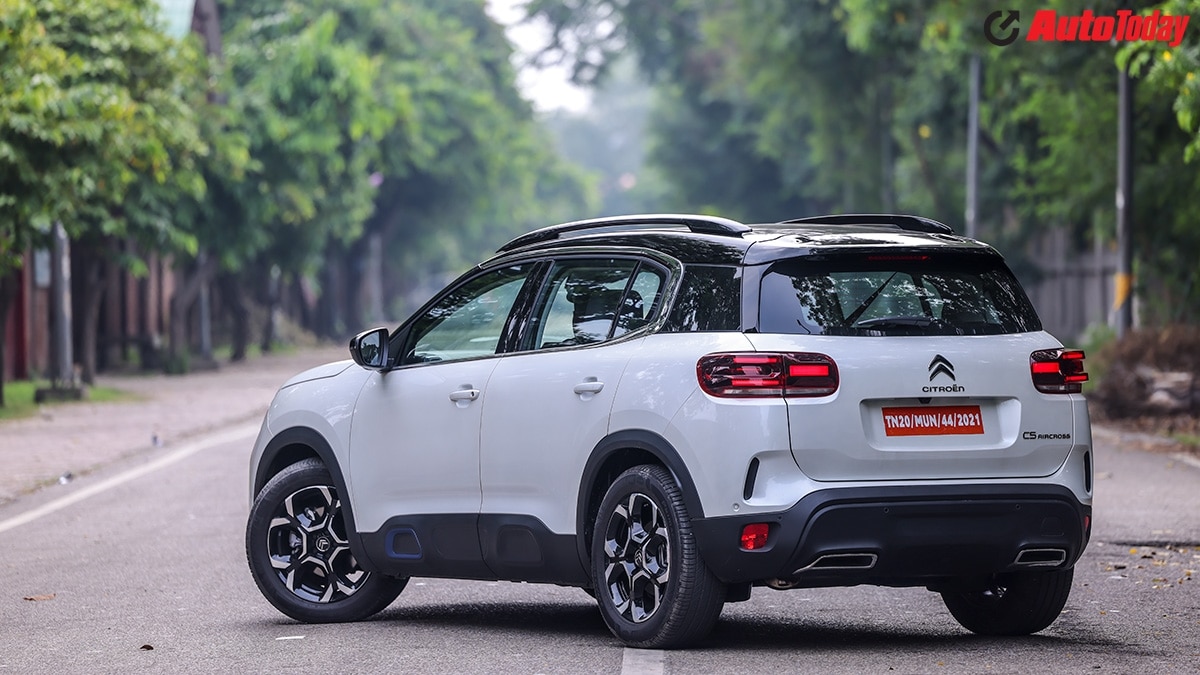 The rear remains unchanged save for the taillamps which are darkened and feature new LED lighting elements.

The taillamps retain the overall shape but have a darker appearance and new lighting elements. The C5 does a fine job of playing to its strengths, especially with the non-polarising design that comes off as something that looks elegant and quite premium. (Clockwise from left) The cabin features a blacked-out theme for the seats while the infotainment system gets a larger 10-inch floating display and the 12.3-inch instrument cluster gets new graphics. The 18-inch alloys feature a chunky design, adding to the muscularity of the SUV.

Changes to the cabin include the new central console which gets a toggle switch for the gear selector instead of the conventional lever and a switch to change the drive modes. Then there is the more prominent 10-inch infotainment system which looks very premium with its graphics and customizable modes, but this new screen means that the older two-part aircon vents have been replaced with more conventional rectangular ones. To operate the dual-zone climate control one has to access the infotainment display, which isn’t the easiest to operate especially while driving but is made easier with a few shortcut buttons below the display. The central console now features a toggle for the gear selector and a switch for the drive mode selector.

The rest of the materials in the cabin, such as the plastics, are top-notch and give a very premium feel, especially with the new upholstery on the seats, armrest and central console. The rest has remained unchanged and you get the unique 33.33:33.33:33.33 split rear seat which can slide forward or backwards and recline individually. Equipment-wise, the C5 features auto wipers, an electrically adjustable driver's seat, a panoramic sunroof, an electrically-operated tailgate, and more. It continues to use the 2.0-litre diesel mill with 177bhp and 400Nm of torque mated to an 8-speed automatic which sends power to the front wheels.
advertisement

Mechanically the car remains unchanged. It continues to use the 2.0-litre diesel mill with 177bhp and 400Nm of torque mated to an 8-speed automatic which sends power to the front wheels. The motor is very refined and suits the C5’s leisurely character, but that does not mean that it cannot be hustled, depress the pedal even at higher speeds and the car does take off. The transmission keeps the revs locked and ensures that the mighty torque is at your disposal at all times. The steering is very light and comfortable to twirl around even in traffic. Toggle sport mode and the steering becomes a bit heftier and the gears are held on for longer. The NVH levels are very impressive thanks to the double-laminated front windows and windshield and only when you push the engine to higher revs will some noise filter in. The ride of the Citroen C5 Aircross is tuned for comfort, best appreciated on bad patches as it just glides over small undulations.

The suspension is tuned for comfort, best appreciated on sub-par roads where the car just glides over rubble and smaller undulations. However, hitting sharp bumps and potholes at speed does have some jarring effects, but for the most part, comfort in the 2022 Citroen C5 Aircross is 5-star. The ride is comparable to a gliding effect, made possible by the Progressive Hydraulic Cushions or dampers. The brakes do a fine job of stopping the car but start using the pedal aggressively and the brakes do show a bit of squishy character. While it does not get AWD like some of its competition, the car does get terrain modes such as Mud and Snow which are a smart addition.

The Citroen C5 Aircross facelift is priced at Rs 36.67 lakh (ex-showroom) for the Shine trim, almost Rs 3 lakh pricier compared to the model it replaces, while the entry-level Feel trim has been discontinued. At this price point, the French SUV is the priciest option when compared to the likes of the Hyundai Tucson, Volkswagen Tiguan and Jeep Compass. But if outright comfort, refinement and carefully curated design are what you are looking for then the C5 should be on your wishlist.