What to watch on Netflix, Disney+ Hotstar and Amazon Prime Video this weekend

We are back with your weekend watchlist! From Bigg Boss 16 to Blonde, we bring to you all that you need to start binging on the soonest. 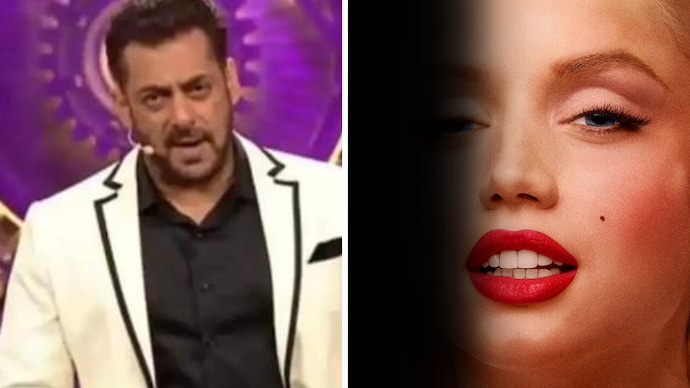 By Anindita Mukherjee: The weekend is knocking at your doorstep and we want you to be all prepped up! To make things easy for you, we have chalked out a list of all that's new on OTT this week. From Bigg Boss 16 to Blonde, we bring to you all that you need to start binging on the soonest.

Ana de Armas plays Norma Jeane/Marilyn Monroe in a fictional psychological drama inspired by the Hollywood legend's life. The film is written and directed by Andrew Dominik. It released on Netflix on Wednesday, September 28. Here's the review.

The Castille Landon-directed romantic drama, After Ever Happy, premiered on Netflix on Thursday, September 29. It features Josephine Langford and Hero Fiennes in the lead.

Plan A Plan B

Tamannaah, last seen in Babli Bouncer, is paired opposite Riteish Deshmukh in Plan A Plan B. The romantic comedy revolves around two people, with contrasting views on life and marriage, who come together following a twist of fate. It is directed by Shashanka Ghosh. Plan A Plan B debuts on Netflix on Friday, September 30.

The Lord of the Rings: The Rings of Power

The Punjabi rom-com starring Gippy Grewal, Karamjit Anmol and Raj Dhaliwal, opened in cinemas on September 2. The film is about a married couple, Gurmel and Beant, who grow apart after the birth of their son. Gurmel, who feels the absence of romance more than his wife, seeks relationships outside his marriage by creating a fake identity on social media to chat with other women. Meanwhile, his wife is also doing the same, to get her husband’s attention back to her. The film is set for digital premiere on September 30.

The Korean film is the sequel to The Outlaws. Detective Ma Seok-do, who travels to Vietnam to extradite a suspect, discovers some horrifying murders of Korean tourists by a ruthless killer named Kang-Hae-ssung. The Roundup will stream on Prime Video from September 30. It stars Ma Dong-seok, Son Suk-ku and Choi Gwi-hwa in the lead roles.

Filmmaker-producer Karan Johar's Koffee With Karan 7 has come to an end. The last episode of KWK 7 aired on Thursday and featured Tanmay Bhat, Danish Sait, Niharika NM and Kusha Kapila. The 13th episode of KJo's chat show saw the four jury members of Koffee awards grilling the show's host. They also questioned Karan about his repeated mentions of Alia Bhatt on his chat show.

Prithviraj Sukumaran's Theerppu, directed by Rathish Ambat, revolves around four friends who meet after 15 years under one roof. The four, instead of sharing happy memories, get entangled in a horror situation.

House of the Dragon

A new episode of the show has dropped. This episode saw a huge time jump and the introduction of a new cast to play some of the lead characters.

The crime thriller series is set in West Bengal and revolves around the power struggles within the Roy family. It has Sachin Parikh, Anjana Sukhani, Pranay Pachauri and Ashutosh Rana in the lead.

The story of the supernatural comedy is set 29 years after the incidents of the first film. Three teens must work together to stop the Sanderson sisters who return to present-day Salem to exact vengeance in this film, starring Bette Midler, Sarah Jessica Parker, Doug Jones and Tony Hale.

October 1 marks the return of Bigg Boss. The 16th season of the controversial reality show will yet again be hosted by Salman Khan. While Abdu Rozik is the first contestant on the show, it is left to see who joins him in the house. The show's grand premiere will be telecast on October 1.

Director Ajay Gnanamuthu's Cobra featuring Chiyaan Vikram, Irfan Pathan and Srinidhi Shetty is a thriller that talks about schizophrenia and a mathematician genius, who is also an intelligence agent. The film showcases Chiyaan Vikram's acting prowess.

Director Shakti Soundar Rajan's Captain starring Arya is an Indianised version of Predator. In the film, the lead actor, a military man, takes on a bunch of alien-like creatures, who pose a threat to the people visiting the area.

Spread across 5 episodes, the mini-series will give viewers an insight into the lives of leading award-winning gamers, including Ankit Panth AKA V3nom, Saloni AKA Meow16k, Amit Thakur AKA Fa2, Rishab Karanwala AKA Rakazone, and gaming commentator and player Ocean Sharma. Gamer’s Den traces the evolution of the gaming industry through the five gaming personalities and their journey so far. It gives audiences an opportunity to understand the realities of gaming and the gamers behind their virtual avatars.

The first episode of Eil Roth Presents: My Possessed Pet will premiere on September 30, 2022. The official synopsis of the project reads, "Explores the true, terrifying tales of what happens when evil spirits, curses and demons take over family pets."

We Bought a Funeral Home

We Bought a Funeral Home is all set to stream on Discovery+ from October 1, 2022. It follows the story of Heather and Arryn with their two teenage kids, Rafferty and Noa, who trade in big city life to buy and renovate an 1800s Victorian funeral home.

The Greatest Beer Run Ever

Graham Norton returns with his star-studded chat show. In the new season, Graham will be seen chatting and joking with an array of film, television, music, theatre and comedy stars, including Tom Hanks, Dolly Parton, Bruce Springsteen, Keeley Hawes, Anya Taylor-Joy, George Clooney, Hugh Grant and Stephen Fry. The new season of the talk show will premiere on October 1.

ALSO READ | What to watch on Netflix, Amazon Prime Video and Zee5 this weekend